The Bold and the Beautiful Spoilers: Join Team Dollar Bill – 4 Reasons to Root for the Sinister Spencer 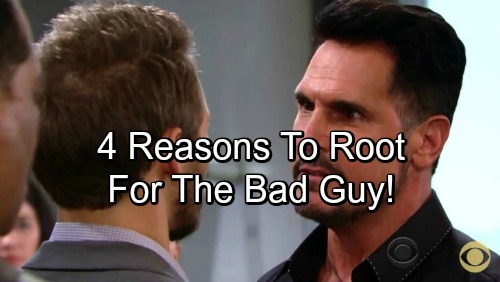 The Bold and the Beautiful (B&B) spoilers tease that Bill’s (Don Diamont) revenge could prove devastating. He plans on fighting back in a big way, so some viewers have turned against mean ol’ “Dollar Bill.” However, there are actually some great reasons to root for the sinister Spencer. Here are a few of them.

1. Don Diamont is bringing his A game.

No matter how you feel about his character, there’s no denying that Don Diamont is so good at playing bad! Diamont is giving Bill some nice layers in the midst of the mess. Although Bill’s fuming over Liam’s (Scott Clifton) actions, there’s some vulnerability underneath. Losing everything has left Bill in a dark place and it’s interesting to see Diamont bring out all the crucial emotions.

2. Selfish Liam deserves what he has coming.

OK, we get it. Orchestrating the fire was horrible and Bill needed to face some form of consequences. However, Liam’s motives obviously aren’t as pure as he claims. It’s clear that Liam’s enjoying his power trip and he won’t budge an inch with his father.

Plus, Liam is completely disregarding Steffy’s (Jacqueline MacInnes Wood) feelings right now. Marriage is often about compromise, but Liam never seems to go along with anything Steffy suggests. He’d rather dote on Sally (Courtney Hope) and spend money like it grows on trees. Maybe Liam deserves to be taken down a notch!

3. Brooke and Bill belong together.

Some B&B fans might disagree with the notion that Brooke (Katherine Kelly Lang) and Bill belong together, but hear us out. Bill’s actions were despicable, but he loves Brooke with all his heart. Ridge (Thorsten Kaye) was willing to kiss his own father’s wife just before his wedding. Even though he knew it’d hurt Brooke and Eric (John McCook) deeply, Ridge just couldn’t keep his lips off Quinn (Rena Sofer).

Brooke seems to be headed toward a reunion with Ridge, what happens if Caroline (Linsey Godfrey) comes around wanting him back? You can bet that Ridge will drop Brooke like a hot potato. Bill does horrible things on the side, but he seems truly committed to Brooke this time around. Plus, they’re a sexy couple! That should count for something.

If nothing else, you might want to join “Team Bill” for drama’s sake. If Liam had his way, he’d just keep spending Spencer’s money until there was none left. Then, he’d probably head off to find more damsels in distress or rant about morals until everyone died of boredom.

What does Bill offer? Sabotage! Fires! Revenge! Ruthlessness! He’s everything a good soap villain should be and we love him for it. The Bold and the Beautiful spoilers say additional shockers are ahead, so everyone should stay tuned.