The Bold and the Beautiful Spoilers: Liam Catches Pregnant Steffy in a Dangerous Lie 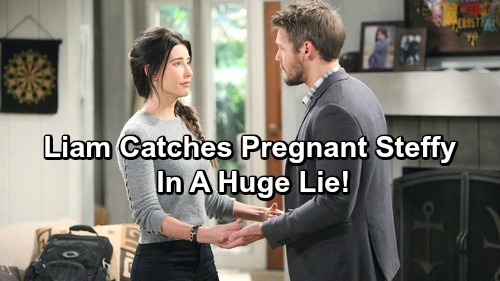 The Bold and the Beautiful (B&B) spoilers tease that Liam (Scott Clifton) will get some peculiar news on next week’s new episodes, December 11-15. He’ll be surprised when Quinn (Rena Sofer) mentions Steffy’s (Jacqueline MacInnes Wood) night at the Forrester guesthouse. Quinn might suggest that she’s happy Steffy and Liam (Scott Clifton) worked through their problems.

Liam will feel like there must have been some miscommunication. Steffy panicked when Liam asked about that fateful night. She insisted that she simply took a drive, parked her car and thought about what a wonderful husband she has.

That obviously didn’t make much sense to Liam in light of his betrayal. It’ll make even less sense when Quinn shares her side of the story. Once Liam mulls everything over, B&B spoilers say he’ll confront Steffy about the evening she supposedly spent alone.

Liam will probably assume that one of two things happened here. He could believe Quinn’s mistaken or Steffy lied for an innocent reason. The last thing Liam has on his mind is blame right now. He still feels terrible about kissing Sally (Courtney Hope) in the rubble.

After Steffy realizes she’s been backed into a corner, she might come clean about her fib. Before Steffy can even explain, Liam may offer his opinion on why she refused to divulge the truth. He might argue that this is his fault, too.

Liam could suggest Steffy was still flustered over everything that transpired. He might contend that he put Steffy in a situation where she felt like the abandoner. Liam may apologize again for driving Steffy away and making her seem like the guilty party. That would just make Steffy feel even worse.

Nevertheless, Steffy and Liam will soon turn their attention to another topic. Later next week, a doctor will confirm that Steffy’s pregnant. The Bold and the Beautiful spoilers say Liam will be thrilled over the fantastic updates. Steffy, on the other hand, will be filled with fear. She’ll know that this baby could easily belong to Bill (Don Diamont), but she’ll hold out hope for a kid with Liam.