BY Heather Hughes on December 28, 2017 | Comments: one comment
Related : Soap Opera, Spoiler, Television, The Bold and the Beautiful 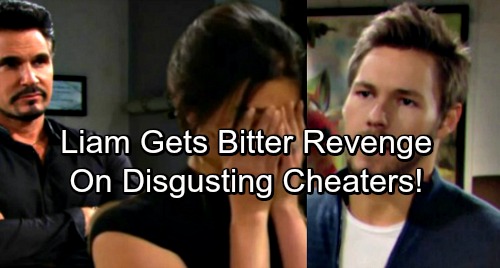 The Bold and the Beautiful (B&B) spoilers tease that Liam (Scott Clifton) will deal with some tough emotions once he learns the truth. Steffy (Jacqueline MacInnes Wood) and Bill’s (Don Diamont) one-night stand will obviously hurt Liam, but rage may be his primary reaction. Sometimes it’s easier to tackle anger than it is to tackle pain. At least fury can be unleashed! Despair just eats away from within.

B&B fans can expect Liam to blast Steffy for her infidelity. He’ll think she used his life-or-death peck with Sally (Courtney Hope) as an excuse to bang his father. Liam might’ve been able to understand if this was anybody but Bill. He just won’t understand how Steffy could betray him like this.

Liam will undoubtedly walk away from their marriage – at least for a while. There’s just no way he can hang in there and pretend everything’s fine. Steffy may remind Liam of their baby and beg him to fight for their love. Of course, Liam will wonder if this is really his child. Steffy will offer paternity results as proof that Liam’s the father, but that won’t solve her problems.

There’s a chance that B&B will reveal a mistake or some tampering down the road. The paternity results could always change. Regardless, the fact that Steffy even had to have a test done will infuriate Liam. This certainly isn’t how Liam wanted to kick off their family.

Once Liam has ripped into Steffy, it’ll be Bill’s turn. The Bold and the Beautiful spoilers state that Bill will face Liam’s wrath in the coming weeks. Liam will feel like this was all a twisted plot, but Bill will claim he just got carried away. He has strong feelings for Steffy, but he’ll assure Liam that he wanted to keep their bond intact. Bill will point out that he worked hard to keep this under wraps for Liam’s sake.

The Bold and the Beautiful spoilers say Liam won’t listen to Bill or Steffy’s desperate pleas for forgiveness. He’d much rather seek revenge instead. Steffy may pay when Liam dumps her, but what about Bill? What could Liam have in mind for his rotten scoundrel of a father? 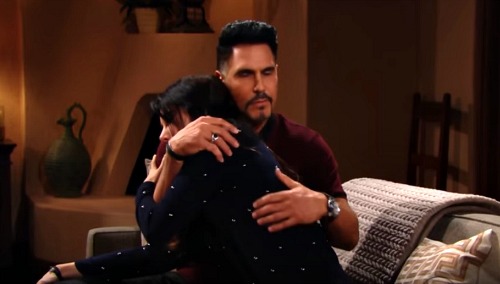 If Liam saved a fire confession recording for a rainy day, he’d have the perfect reason to use it. If not, perhaps Liam can get Wyatt (Darin Brooks) on his side. They might be able to team up and take Bill down once again. Liam could embezzle large amounts of money if nothing else. Hitting Bill in his wallet would be the ideal punishment.

Whatever the case, Steffy and Bill will indeed be sorry they provoked Liam. He’ll make their lives miserable once he’s finally in the loop. We’ll give you updates as other B&B news comes in. Stay tuned to the CBS soap and don’t forget to check CDL often for the latest Bold and the Beautiful spoilers, updates and news.