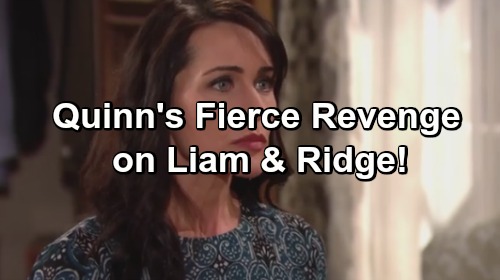 The Bold and the Beautiful spoilers (B&B) reveal that Hades hath no fury like a woman scorned, and in this case Lady Quinn (Rena Sofer) has her hands full when she discovers that there are two errant knights with whom she has scores to settle! Look out L.A., a devil wind is about to descend!

Quinn has been called many things but, “a changed woman,” is her favorite self-assessment. Once the town pariah, she now has status and power thanks to her marriage to Forrester family scion, Eric (John McCook).

Prior to her incredible transformation, by the love of a good man of course, she was a vindictive meddler whose happiness was second only to that of her son, Wyatt (Darin Brooks). Whatever Wyatt wanted, mama Quinn pulled out all the stops to see him satiated.

Her most recent interference involved kidnapping her son’s romantic competitor, and half-brother, Liam (Scott Clifton). This paved the way for Wyatt to woo without distraction the mutual object of the brother’s affections, pneumatic Steffy (Jacqueline MacInnes Wood).

Although Quinn has since become the model of decorum, Liam and Ridge (Thorsten Kaye), Eric’s son, would like to see her disappear. To that end they have concocted a cockamamie scheme to fool Eric into thinking that Quinn is cheating on Eric with Ridge and thus 86 their union.

Ridge The Dressmaker’s plan is in motion: he kindly massaged Quinn’s swollen ankle at work, personally fitted her in a skin tight dress, and swooned over her in the company spa.

Quinn likes the special attention, believing that contrite Ridge is just coming in from the Cold War he started with her and Eric. But spoilers reveal that when Quinn discovers his devious plot, she’ll use it to go all Mad Max on her shaggy-haired stepson.

Her first move is to bust up Ridge and Brooke’s (Katherine Kelly Lang) impending nuptials, and spoilers reveal that she makes a direct hit! By the time Quinn’s done with Bridge, only a pile of lumber and rebar remain!

Next she uses her knowledge of Liam’s complicity to blow apart his relationship with Steffy and manipulate a Wyatt/Steffy reunion. Cancel that next tatt removal session, Steffy, it won’t be needed!

You won’t want to miss a single minute of Quinn’s payback, it will be sudden, unexpected and spectacular all at the same time! Don’t forget to check CDL often for the latest The Bold and the Beautiful spoilers, news and updates.  Come and join the conversation on our Bold and Beautiful Facebook Group!