The Bold and the Beautiful Spoilers: Ridge Gains a Deeper Understanding of Quinn, Kisses Her – Thomas Gives Steffy Bad News 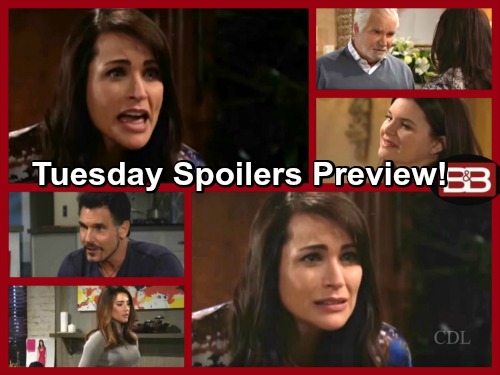 The Bold and the Beautiful (B&B) spoilers for Tuesday, January 17, tease that Eric (John McCook) will try to reassure Katie (Heather Tom). He’ll contend that his relationship with Quinn (Rena Sofer) is fine, so there’s no need to be concerned. Eric will promise that Quinn trusts him as much as he trusts her. He’ll hope that Katie can grasp just how much they love each other.

Katie won’t be convinced that Quinn is under control, but she’ll try to put her doubts aside. She knows it’s not her place to meddle. Of course, that doesn’t mean Katie can stay out of trouble. She’ll probably end up poking her nose where it doesn’t belong at some point. 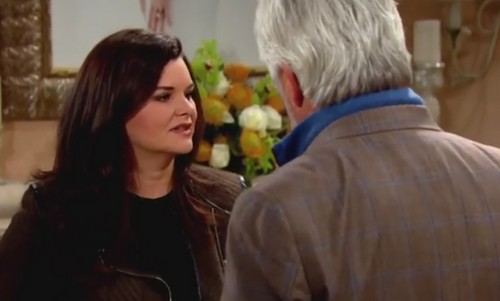 Elsewhere, Steffy (Jacqueline MacInnes Wood) will also mull over Eric and Quinn’s marriage. When they first got together, Steffy was certain that her granddad was being used. She doesn’t seem so sure of that anymore. Steffy will admit it’s possible that Quinn’s feelings for Eric are genuine.

Still, Steffy has no intention of trusting Quinn. That would be far too risky. Steffy thinks Quinn is a snake, even if she’s a somewhat tamed one. Thomas (Pierson Fode) will likely agree that it’s wise to cautious. 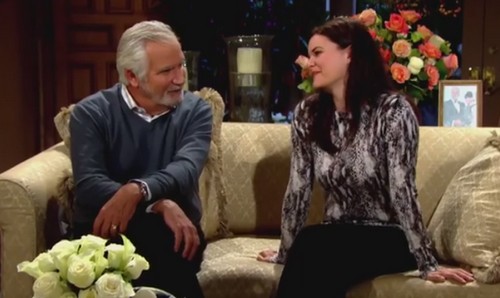 Once they’ve covered Quinn, Thomas will have some bad news to go over with his sister. He’ll give Steffy updates on some problems he’s dealing with in his personal life. This might be about parting ways with Caroline (Linsey Godfrey) or some issues they’re facing. Whatever the case, Thomas will be bummed about the situation he’s in.

Other Bold and the Beautiful spoilers say Quinn will continue to rant at Ridge (Thorsten Kaye). She ordered him to leave, but it looks like he won’t budge. Quinn will urge Ridge to get any marriage destruction ideas out of his head. She’ll insist that she values what she’s found with Eric and she’s never letting it go. 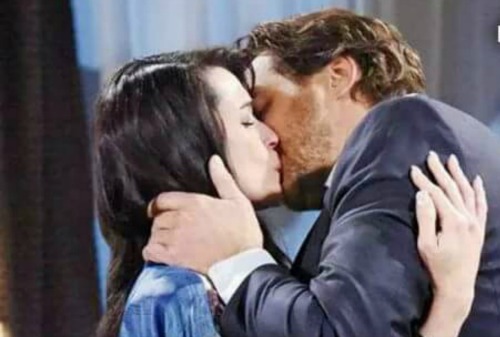 Tuesday’s B&B preview video shows Quinn shouting, “I’m not giving that up! NOT…EVER!” Ridge will begin to see that Quinn truly cares about his father. Their chat has been pretty heated thus far, but things will take an intriguing turn. Ridge won’t completely change his mind about Quinn, but he’ll at least dial his hatred down a notch.

The Bold and the Beautiful spoilers indicate that Ridge and Quinn will lock lips by the time this conversation is over. Consequences could come later, but their kiss will help them get along for now. We’ll keep you posted as other info emerges. Stick with B&B and don’t forget to check CDL often for the latest Bold and the Beautiful spoilers, updates and news. Come and join the conversation on our Bold and Beautiful Facebook Group!