The Bold and the Beautiful Spoilers: Steffy, Katie and Wyatt Work on a New Deal – Sheila Learns Of Quinn’s Cheating 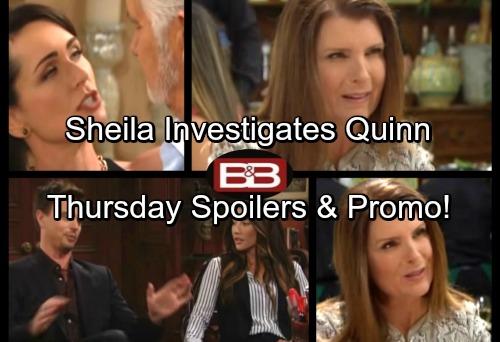 The Bold and the Beautiful (B&B) spoilers for Thursday, June 29, tease that Quinn (Rena Sofer) will remind Eric (John McCook) of how much she loves him. She’ll insist that she never wants him to doubt her commitment. Quinn will maintain that Eric is the only man for her, but her recent behavior suggests otherwise.

After Ridge (Thorsten Kaye) saved Quinn’s life, she confessed that she loved him as well. Of course, Quinn doesn’t plan on doing anything about her feelings for Ridge. She realizes she struck gold with Eric and she doesn’t want to lose such a great guy. Quinn truly cares about her husband and doesn’t want to see him get hurt.

Unfortunately, B&B spoilers say it won’t be long until Eric finds out about Ridge and Quinn’s deep bond. He’s not going to be happy about their betrayals. Eric will have to deal with the Brooke (Katherine Kelly Lang) and Katie’s (Heather Tom) deception, too. He’ll really be blindsided when all of this blows up down the road. 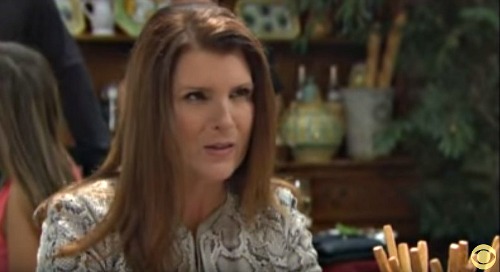 Sheila (Kimberlin Brown) will do her part to make sure Quinn’s secret is revealed as soon as possible. She can tell that Quinn isn’t the doting wife she claims to be. It looks like Sheila might grill Charlie (Dick Christie) again. He doesn’t know the details of Ridge and Quinn’s connection, but he has a strong hunch about what happened between them.

Sheila will point out that Eric’s loved ones seem to have some misgivings about Quinn. She’ll attempt to get to the bottom of their concerns, which means a major threat is emerging. Quinn will have a tough time keeping Sheila under control in the coming weeks.

Other Bold and the Beautiful spoilers say Wyatt (Darin Brooks) will meet with Steffy (Jacqueline MacInnes) and Ridge at Forrester Creations. Since Wyatt has already been helping Katie out with fashion show prep, they’ll think they should make this teamwork official. Steffy and Ridge will agree to let Spencer Publications assist with their swimwear debut.

Wyatt won’t see any reason why Bill (Don Diamont) would object. Katie and Steffy will try to lock everything down so they can make this fashion show a huge success. Will they run into a few snags? We’ll give you updates as other Bold and the Beautiful news comes in. Stay tuned to B&B and don’t forget to check CDL often for the latest Bold and the Beautiful spoilers, updates and news.