The Bold and the Beautiful Spoilers: Tuesday, August 22 – Katie Struggles to Get Rid of Bill – Brooke Gives Eric a Dire Warning 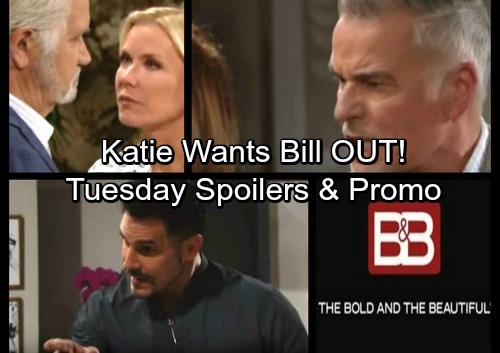 The Bold and the Beautiful (B&B) spoilers for Tuesday, August 22, tease that Brooke (Katherine Kelly Lang) will try to get to the bottom of James’ (Ian Buchanan) medical advice. She can tell that Sheila (Kimberlin Brown) isn’t as ill as she’s pretending to be. Brooke will urge James to tell her why he’s helping Sheila with her agenda. She’ll be convinced that he’s lying for Sheila’s benefit.

When James stands by his diagnosis, Brooke will become even more agitated. She’ll wonder if Sheila is really that impaired. Brooke just won’t think a bump on the head requires all this fuss. She’ll feel like Sheila was ready to hit the road a long time ago.

It seems James will hide the truth for now, but he’ll do his best to shield Eric and the Forresters from Sheila’s drama. Once he finishes his chat with Brooke, James will encourage Sheila to give up her fight. He’ll believe her goal of being the Forrester matriarch is simply unattainable.

Tuesday’s B&B preview video shows a tense James trying to talk some sense into Sheila. He’ll ask if Sheila honestly thinks the Forresters will let her back into their lives. James will contend that Sheila has no chance with Eric, but she’ll disagree. Sheila will argue that James doesn’t understand how much progress she’s made.

The Bold and the Beautiful spoilers state that Brooke will focus on another angle. She’ll remind Eric that Sheila is dangerous and can’t ever be trusted. Brooke won’t want her ex to be duped by Sheila’s latest act. She’ll believe Eric should reflect on all the damage of the past instead.

Nevertheless, it’s tough for a guy like Eric to just throw out a suffering woman. As long as James sticks to Sheila’s plan, Eric will probably go along with it. He has no reason to believe James is lying about Sheila’s needs.

Meanwhile, Katie (Heather Tom) will have trouble getting rid of Bill (Don Diamont). After he interrupts Katie and Wyatt’s (Darin Brooks) sexy time, Bill will have questions. He’ll spot Wyatt’s clothes in Katie’s room and determine that a man must be in the bathroom.

Bill will grill Katie about her love interest’s identity, but she’ll undoubtedly stay tight-lipped. She’s not prepared to share this news with her ex-husband and Wyatt isn’t prepared share it with his dad! The Bold and the Beautiful fans should enjoy watching “Watie” squirm.

How long can Katie and Wyatt keep their romance under wraps? We’ll give you updates as other details emerge. Stick with B&B and don’t forget to check CDL often for the latest Bold and the Beautiful spoilers, updates and news.