BY Heather Hughes on December 4, 2017 | Comments: one comment
Related : Soap Opera, Spoiler, Television, The Bold and the Beautiful 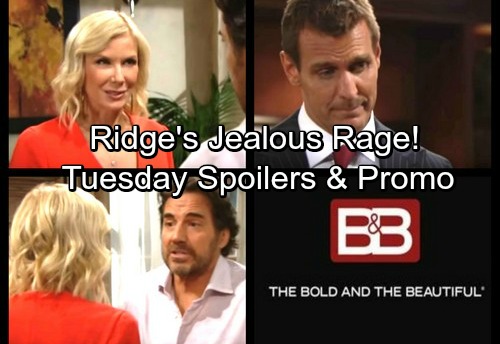 The Bold and the Beautiful (B&B) spoilers for Tuesday, December 5, tease that Thorne (Ingo Rademacher) will discuss Brooke (Katherine Kelly Lang) and Ridge’s (Thorsten Kaye) broken engagement. He just admitted he’s in the loop on the Australia incident. Thorne knows Ridge cheated on Brooke, but he can barely believe it. He’ll note that it’s such a despicable thing to do.

Thorne will add that Brooke is one of the most accomplished, beautiful women in the world. He’ll ask Eric (John McCook) who Ridge was willing to cheat with. That question should lead to some awkward moments! Eric may admit that it was his own wife, Quinn (Rena Sofer). When Thorne finds out the whole ugly story, it should make Ridge even more disgusting in his eyes.

Meanwhile, Ridge will rant about Thorne’s agenda. He can probably tell Thorne wants Brooke, but what about his plans at Forrester Creations? Ridge won’t think he has all the details, but he’ll be determined to find out what’s going on. Brooke will grow frustrated with Ridge for being so suspicious. She won’t see why this has to be some big mystery to solve.

Brooke will contend that Ridge should just be happy that Thorne’s back. She’ll play up the family connection, but Ridge still won’t be pleased that his brother intends to hang around indefinitely. B&B fans can expect the conflict to rev up once Thorne unveils his latest project.

The Bold and the Beautiful spoilers say Thorne will show off a new line he’s been working on. Eric and Brooke will be thoroughly impressed, but jealousy will hit for Ridge. He’ll do everything in his power to get Thorne out of the picture at FC.

Elsewhere, we’ll see a rare Ivy (Ashleigh Brewer) sighting. She’ll be around to chat with Quinn about all the drama. The Bold and the Beautiful spoilers say they’ll agree that Ridge and Thorne are headed into a fierce battle. Quinn and Ivy will talk about how different Thorne and Ridge are, but B&B viewers can undoubtedly see some similarities.

Ridge and Thorne are both interested in being with Brooke and running the show at Forrester Creations. They’re also pretty arrogant, so that’s another thing they have in common! Which smug sibling will win this war? We’ll give you updates as other news comes in. Stick with the CBS soap and don’t forget to check CDL often for the latest Bold and the Beautiful spoilers, updates and news.