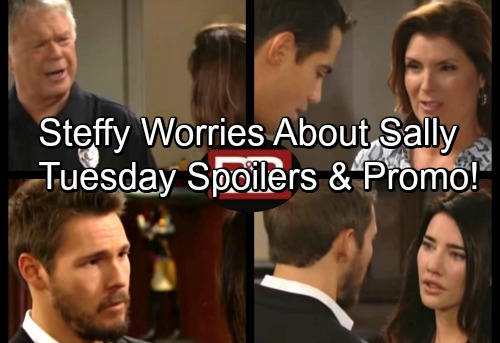 The Bold and the Beautiful (B&B) spoilers for Tuesday, October 10, tease that Liam (Scott Clifton) will offer reassurance to his wife. Steffy (Jacqueline MacInnes Wood) wasn’t happy about Liam’s decision to take another woman on a trip, especially since that woman is Sally (Courtney Hope). It’s no secret that Sally and Steffy don’t get along.

Nevertheless, Liam will promise Steffy that he was simply cleaning up Bill’s (Don Diamont) mess. He wouldn’t feel right about leaving Sally with a pile of burned rubble. Liam will insist that this won’t affect their marriage at all. He won’t want Steffy to ever doubt his love and commitment to her.

Steffy might settle down for now, but this obviously won’t be the end of the conflict. It won’t be long until Liam goes out of his way to help Sally again. Of course, Bill will be waiting to get Steffy riled. The Bold and the Beautiful spoilers indicate that temptation is just around the corner!

In the meantime, Bill will receive some infuriating news. Justin (Aaron D. Spears) will reveal Liam’s spending spree in Tuesday’s B&B episode. He’ll explain all the changes Liam’s made and how much they’re costing the company. As Bill seethes over his lost millions, he’ll become even more determined to seek revenge.

Other Bold and the Beautiful spoilers say Charlie (Dick Christie) will clash with Sheila (Kimberlin Brown). When she admits she’s still plotting against Quinn (Rena Sofer), Charlie will give her an earful. He’ll shout that Sheila should still be in the slammer. Charlie just won’t think it’s right for Sheila to keep messing with people’s lives like this.

Sheila has relied on Charlie as a partner in crime, but he may not be willing to pitch in anymore. Fortunately, Sheila has other options. She’s paying Mateo (Francisco San Martin) a hefty sum for his seduction efforts. Mateo will try to resist as this scheme revs up, but Sheila will do whatever it takes to keep him on board.

Sheila will insist that Quinn’s going to cheat again and Mateo’s going to make it happen. If he doesn’t, he could pay a steep price! We’ll give you updates as other B&B details emerge. Stay tuned to the CBS soap and don’t forget to check CDL often for the latest Bold and the Beautiful spoilers, updates and news.