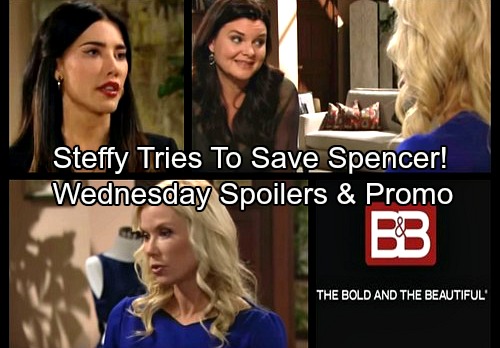 The Bold and the Beautiful (B&B) spoilers for Wednesday, October 18, tease that Brooke (Katherine Kelly Lang) will open up to Katie (Heather Tom) about the end of her marriage. She’ll admit that part of her still loves Bill (Don Diamont), but she just can’t tolerate his risky behavior. Brooke will suggest that she doesn’t know what Bill’s capable of anymore.

Since Brooke essentially broke up Bill and Katie’s relationship, she’ll hope that there are no hard feelings. Of course, Katie wouldn’t have approved of Bill’s actions either. If she had been with Bill after the fire, she might’ve left him as well. 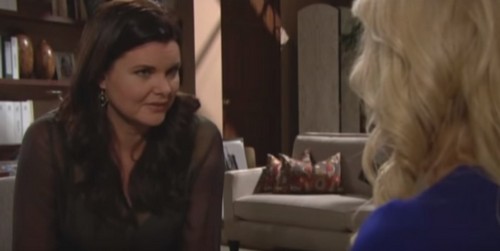 Regardless, Katie will assure Brooke that they’ve moved past all the sister drama. She’s obviously happy with Wyatt (Darin Brooks) now, but she probably won’t share that info just yet. Instead, Katie will let Brooke know she made the right decision. She’ll point out Bill is a good father, but he can be dangerous.

Elsewhere, Steffy (Jacqueline MacInnes Wood) will try to fix this mess. She’ll declare that she’s going to do everything she can to stop the Spencer family from destroying itself. The Bold and the Beautiful spoilers say Steffy will think Bill is her best bet if she wants to spark change. She’ll urge him to truly consider what he did wrong and make an admission of guilt.

Steffy knows Liam (Scott Clifton) is still furious. She’ll contend that the only way to achieve peace is for Bill to show real remorse. Steffy won’t want phony-baloney lip service. She’ll argue that Bill needs to accept responsibility and perhaps do a bit of groveling. 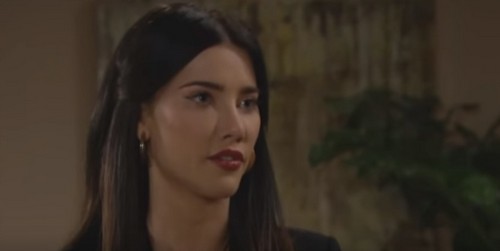 However, that’s not really Bill’s style. He’ll concede that Steffy’s right, but B&B fans can expect another fierce confrontation by the end of the week. It looks like Liam will indeed face Bill’s wrath!

In the meantime, Ridge (Thorsten Kaye) and Liam (Scott Clifton) will grill each other. The Bold and the Beautiful spoilers say Ridge will want to get to the bottom of Bill’s ruthlessness and Liam may have questions about Brooke’s side of all this. They’ll walk away without securing much info, but they can always use alternate tactics.

Is Ridge inching closer to a reunion with Brooke? Will Liam regret what he’s done to Bill? We’ll give you updates as other B&B news comes in. Stay tuned to the CBS soap and don’t forget to check CDL often for the latest Bold and the Beautiful spoilers, updates and news.