The Bold and the Beautiful Spoilers: Week of November 27 Update – Sheila’s Shocking Move – Eric and Quinn In Grave Danger

BY Marcy Cohen on November 24, 2017 | Comments: one comment
Related : Soap Opera, Spoiler, Television, The Bold and the Beautiful 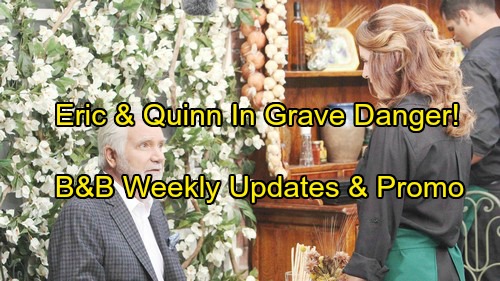 The Bold and the Beautiful (B&B) spoilers tease that Eric (John McCook) is in for a big surprise. He’ll stop by Il Giardino for a meal, but Sheila’s (Kimberlin Brown) continued employment there will catch him off guard. Eric thought Sheila would surely leave town after the humiliation they put her through. It turns out Sheila was more resilient than anticipated.

B&B fans can expect some tense moments once Eric encounters his ex on new B&B episodes this week, November 27 – December 1. He’ll make it clear that Sheila still isn’t welcome in his home or in his life. Sheila will actually be pretty understanding. She’ll give Eric a seemingly heartfelt apology, so Eric’s in for a double shock. He’ll be taken aback by how genuinely sorry Sheila appears to be.

The Bold and the Beautiful spoilers say Sheila will concede that Eric was right. She’ll insist that she simply wanted to make sure Quinn (Rena Sofer) could be a loving, devoted wife. Sheila will admit that she now sees Quinn’s good qualities, which should raise some eyebrows for B&B viewers. Everything about this apology screams that it’s phony.

When Quinn finds out that Sheila’s still in Los Angeles, she’ll undoubtedly be concerned. It’ll be up to Eric to convince her that Sheila’s no longer a threat. Quinn may calm down, but she’ll probably never buy that Sheila is a changed woman. Eric’s likely a fool for even considering the idea! 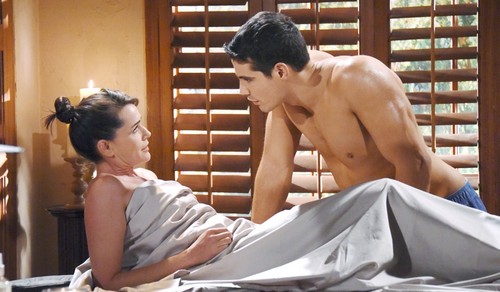 Sheila will go about her business and hope that the happy couple forgets her recent mischief. Once Quinn and Eric have lowered their guard, what will Sheila’s next move be? It’s possible that she hasn’t truly given up on Eric. She may come up with another twisted plan to get him back.

Then again, Sheila may be on a mission for vengeance. She was mortified by Eric and Quinn’s little portrait charade. Sheila’s certainly the kind of gal who holds grudges, so she may want Eric to go down right along with Quinn.

Whatever the case, there’s no way this apology will stick. The Bold and the Beautiful brought Sheila back as a troublemaker, so trouble she must make! We’ll give you updates as other B&B news comes in. Stay tuned to the CBS soap and don’t forget to check CDL often for the latest Bold and the Beautiful spoilers, updates and news.