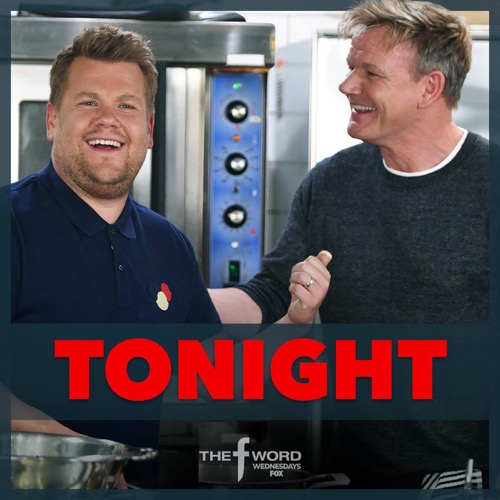 Gordon welcomes us to the F Word Kitchen, where the F stands for FOOD, FAMILY and FUN. He warns us to be prepared to see him like we have never seen before as families across the country compete head-to-head in his restaurant. Each team has to serve half the restaurant and the diners are asked if they would pay for their dinner, whoever has the highest amount of votes wins.

In the kitchen we have the Cooking Cubans wearing the black aprons. Alis and Joe fled Cuba to the US, but cook Cuban food so the kids grow up knowing their heritage. Derek takes care of the grilling and the vegetables; Joe, the father, is the anchor of the group while the daughter, Kristen finishes each dish with finesse. Alis is the leader but Joe admits this is going to be stressful but they will be moving. Gordon tells them to trust their sous chef Whitney.

The other team is School Pride is a team of teachers who show how much they care by cooking delicious food for the students. Cheryl is the team captain and Andrea is her right-hand. Sam is the nutritionist and Clay is the barbecue master who has been teaching at the school for 34 years; their sous chef is Ben.

Chef Gordon Ramsay shows us how he makes the pork dish they are making in the kitchen tonight. It is an amazing pork chop served with fantastic mashed potatoes, grazed cabbage and fabulous caramelized apples. He asks for viewers to try cooking this dish at home, post it with #TheFWord and you might just get posted live.

The Cooking Cubans have served 14 dishes and School Pride has served 15, but a lot of the feedback is complaints that the Cubans pork is too dry and Chef Ramsay says its the one protein you don’t want dry! Ramsay goes to their side of the kitchen and shows Derek how to properly cook the pork chops, syaing its a very lean meat so rendering the fat on the side is super important.

Gordon Ramsay meets with James Corden, the host of the Late, Late Show. He is a triple threat in the sense that he can dance, sing and act but Gordon wants to know if he can cook. They are both cooking a Chicken Thai Noodle Broth, they are to compete to see who makes it better. He jokes that it was Chef Jamie Oliver that taught him how to cook this dish; saying there is no one like him. He admits his mom taught him.

Chef Ramsay shows James his pan, who takes a piece of vegetable out, saying its burnt and throws it. He says this is the best mood he has ever seen Gordon in when he is in a kitchen except when he does the show with kids. They talk about Carpool Karaoke and his favorite one was with Bruno Mars.

James knicks his finger and blames the knives, then Gordon tells him to close his eyes and test. He gags on it saying its not wonder Gordon had to get out of England. Gordon pretends to cut himself and James says its the first time he genuinely felt sympathy for him. The competition is serious when Gordon makes his broth and James steals it, dumping it into his own pot.

They bring the dishes to the cooking class across the hall, asking them to judge the dishes. They yell through the window, telling them to dig deep as some try just a mushroom and no chicken. Gordon wins 4-1.

Gordon calls over School Pride as they were just chanting. He says they got off to a good start and he loves their passion but is that passion going to lead them to victory in this full house? He tells them to focus and quality.

Doris, Cheryl’s 80-year-old mother is there for dinner. Gordon welcomes her to The F Word and learns she was the one who taught Cheryl to cook, beginning in grade 8. She shows him two family cookbooks and they all joke when two recipe cards fall out from other chefs. He says the teams will return cooking live if Doris shuts up; they all laugh.

Gordon welcomes us back and its time to show the teams their current scores; The Cooking Cubans cooked 20 dishes but only 13 would pay. School Pride made 20 dishes as well but 15 would pay for it. Gordon tells Derek to take his time cooking the pork and tells both teams to raise their quality and make sure every guest leaves enjoying their food.

Gordon has been invited to NasCar Grand Marshal Speedway where he will cook for the pit crew with Danica Patrick. He tells her he really wants to race and she says she will be impressed if he can get within 20 seconds of qualifying time of 23.16; he does it in 29 seconds. He attempts to be as quick and efficient as the crew but is told if they compare his work there to a kitchen, he’d be working at McDonalds.

Chef Gordon Ramsay decides to make the pit crew an easy and simple breakfast of an omelette and nutrient packed smoothie. He tells them if they lose, they cannot blame the food. He shouts, “Drivers, start your engines!” Danica finishes in the top 10 and Gordon is back in the kitchen.

The Cooking Cubans are called over where Joe is told to let loose and delegate more. Derek promises he is working on making a juicy pork chop rather than the dry ones he had served earlier. He suggests Alis changes strategy and switch men out.

After last week’s first date, a bachelorette asked to have her party at The F Word; he goes to their table and greets them. He congratulates the bride-to-be whose wedding is in 10 days; she introduces her friends and he asks how the food was. After she reveals what the wedding meal is, he listens to stories of the bride. They share a story of her falling with her pants ripped wide open; together they have a drink and Gordon says if he drinks that he will have a wide hole in his pants too.

If you’d like to be on the F Word, send out word with the hashtag #TheFWord and it could be you sitting there next week. He says they were a nightmare and hopes the next group will be quieter. Gordon next joins Kaitlin Olson “The Mick” and her husband, Rob McElhenney wondering how they enjoyed their meal.

They both admit the one thing she cannot cook is a pork chop and this one is super juicy. They talk about how they kept their relationship a secret while meeting on set of “It’s Always Sunny in Philadelphia”. Gordon tells Kaitlin he is bringing her to the kitchen to show her how to cook pork; she comes to the Cooking Cubans’ kitchen. She asks him if he could just come live at her house, he says he snores; she says so does their dog.

Gordon now takes time to taste both teams’ dishes. Cooking Cubans have served 39 and School Pride served 42. He calls both captains over, getting them to hustle. He shares his opinions on it, School Pride is plated nicely but there is no sauce. Cooking Cubans dish has everything but not very neat; this time the pork is too pink. He encourages them to finish strong, telling Alis to wipe her brow so customers don’t complain about it.
Its time for Gordon Ramsay to do his prank, time for some fun. He is put in front of a green screen and when fans see him, he begins to talk to them although they only thought it was a poster. When asked who their favorite chef is, one woman says Jamie Oliver and he pretends he didn’t hear that.

He continues to ask questions and gets really bad answers; one woman says she cracks coconuts open with her elbows and he says he opens walnuts with his ass and as they say in Scotland, “Piss off!” He tells the group of teens to hug him and suddenly he appears behind them as they scream and hug him.

He joins the young shoppers in the restaurant, asking if they returned their credit cards back to their parents. They promise to return them soon. They all say the food is great and he tells them to stop shopping for 3 weeks. Gordon announces the kitchen is closed. Out of 50 diners, for one team 25 said they would pay and for the other team out of 50 diners, 31 would pay.

The next team to go on the wall beside last week’s winners: Sexy Paesens is School Pride. In the season finale, Chef Gordon Ramsay will decide which two winning teams will compete for $100,000.