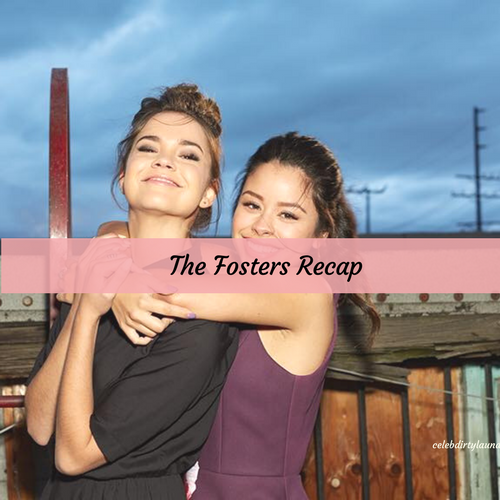 Tonight on Freeform their hit drama The Fosters returns with an all new Wednesday, March 28, season 4 episode 18 called, “Dirty Laundry,” and we have your weekly The Fosters recap below. On tonight’s episode as per the Freeform synopsis, “Lena is at her wit’s end when everyone comes to her to handle all their crises and Stef is never around to help.”

Lena is upset that drew stabbed Monte in the back. She tells Stef that he will probably do the same to her. Marianna visits Gabe. He is in the middle of moving. He got a job in Lake Tahoe. Marianna wants him to help with the tree house. Jude, Brandon and Callie are eating in the kitchen. Stef and Lena come in. Brandon wants to move into the garage. Jesus can have his room. Jude thinks it is a great idea. Stef and Lena tell Callie that the trial will be a week from today.

At school, Jude is bullied for attending what one classmate calls homo sex ed. Lena offers to help more with Drew’s workload. Callie is eating with Aaron, speculating about Troy. Callie explains that the lawyers don’t believe Troy killed his grandmother. Aaron is headed to LA for his dad’s birthday. He invites her to come along. Callie asks Lena if she can go. She needs to check with Stef. Callie begs. Lena agrees after she fails to get in touch with Stef.

Emma and Jesus are kissing in Jesus’ bed. She asks if what they are doing is safe for them. Gabe tells Anna that he got evicted. He has been living in his truck. He needs to go work in Tahoe. He wants Anna to talk to Marianna and Jesus.

Jesus asks Lena if he can have sex. She is overwhelmed. She doesn’t encourage it, but insists that he be careful. Jesus wants her to call his doctor to see if it safe to have sex with his TBI. Lena texts Stef. She wants her to come home.

Aaron and Callie arrive at his parents. His mother is warm and welcoming. His father is distant. Aaron’s brother shows Callie to her room while Aaron’s mother asks him to help with dinner. When she calls him she refers to him as Alice. Callie looks in the family room at all of the family pictures of Aaron as a girl. He comes in followed by Evan his brother who wants to know if Callie is a lesbian. She tells Aaron that her and AJ broke up. She jokes that it is okay, she is going to jail anyways. Aaron tells her not to give up.

Noah and Jude are in the school after dark looking at the results of the history test. Jude looks up his bully’s score.

Aaron’s mom refers to him as Alison during dinner. She apologizes. Aaron gives his father a 1st edition golf book. He doesn’t thank him or care. Lena has ordered pizza. Stef is disappointed. They have eaten pizza a lot this week. Lena reminds her she can go to the grocery store too. Aaron’s father sees a tattoo on his wrist during dinner. He gets angry. Hasn’t he mutilated himself enough? Callie defends him. Things become awkward. Anna asks Mike if Gabe can stay with him. She will go stay with her parents.

Callie offers to leave with Aaron. He is mad that she defended him. He says that he can defend himself. Callie thinks it is not complicated. He needs to tell them how he feels. They shouldn’t treat him that way. He doesn’t want to talk anymore. He wants to go to sleep.

Jude posts his bully’s failed test on the lockers. Noah doesn’t want to hang out anymore with Jude. He doesn’t approve of Jude’s move to bully a bully.

Stef gives Brandon chores, to go grocery shopping, now that he wants to move into the garage. Stef and Lena are debating if Jesus should be allowed to have sex. Lena leaves to get ready for bed. Callie goes downstairs to get water. Aaron’s mother is in the kitchen.She apologizes to Aaron’s mom for saying those things at dinner. Aaron’s mom talks about the loss, losing her daughter. Did she make him

She apologizes to Aaron’s mom for saying those things at dinner. Aaron’s mom talks about the loss, losing her daughter. Did she make him suffer when she put him in dresses. She won’t have grandchildren. All of the past mistakes make her sad. Callie reassures her that Aaron loves her and that he is a good guy.

Callie sneaks into Aaron’s room and apologizes. He kisses her. She kisses him back. The next morning she runs out for coffee and donuts. She has a picture of Aaron printed out. She gives it to his mother so she can have a picture of her son and not her daughter in the family room.

Marianna visits Anna at Mike’s Anna explains Gabe’s situation to her. Anna gives Marianna Gabe’s new number. Mike overhears it all. He wants to help Gabe but he has enough to deal with when it comes to AJ, Anna and the baby.

Jesus and a topless Emma are making out in his room. Jesus is having trouble performing. He blames it on their sex talk with Lena.

At school, Noah kisses Jude for being the nice guy he knew he was. The two start to take down his bully’s test on all the lockers before school starts.

Brandon brings home the groceries. It is all junk food and he has forgotten the chicken. Lena is upset. Marianna comes in to ask if Gabe can move into the garage since he is homeless. Jokingly, Lena says yes. Marianna thanks her. She already told Gabe he could so she is relieved. Lena looks on in awe as Marianna runs off.

Jude and Noah hide. Two men are walking around. They overhear them say that they plan to convert Anchor Beach from a charter to a private school.Aaron gets the dirt for Callie. Vanessa did have an affair. Callie kisses Aaron after he tells her it is okay

Aaron gets the dirt for Callie. Vanessa did have an affair. Callie kisses Aaron after he tells her it is okay of the night before didn’t mean anything to her.

Brandon and Marianna fight over the garage. He wants it and she wants Gabe to move in. Lena reminds Jesus to take his meds. He begins reading the side effects. The family realizes that he can read! They all hug each other with joy.

Lena and Stef argue. Lena is mad that Stef is so busy. She is overwhelmed by all of the kids. She feels like a single parent. Stef realizes the burden is falling on her. Stef appreciates it all. She is going to work harder to be better.

Jesus thanks Brandon for the room and for helping him with rehab. He is a good brother. Jesus doesn’t take his pill because of the side effects. Lena does the laundry and finds Emma’s letter.