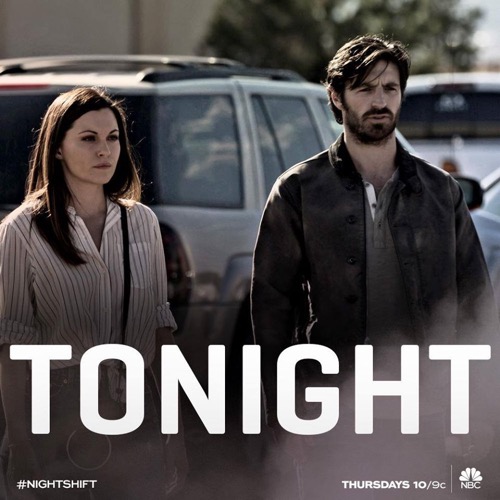 Tonight on NBC their new drama The Night Shift airs with an all new Thursday, July 27 season 4 episode 6 called “Family Matters,” and we have your The Night Shift recap below. On tonight’s Night Shift episode as per the NBC synopsis, “Drew faces an emergency on his flight home when passengers become sickened. Also, some staffers participate in an obstacle-course fund-raiser hosted by Akbar Gbajabiamila (“American Ninja Warrior”); Scott has an unforgettable date; TC treats a soldier.”

TC came back! However, things have changed since he left and Jordan for one had moved on. She and Cain have sort of fallen into a casual sex thing when there’s no guarantees on either side because technically their relationship was forbidden yet he had been curious when Jordan asked for a moment alone while they were both in bed. So Jordan didn’t want to tell Cain about TC and she didn’t want TC to overhear Cain in the background. And eventually that became a difficult game to play.

Jordan and Cain shouldn’t have slept together. She was his boss and she didn’t feel entirely comfortable with having him as her subordinate. Yet, Scott went to Cain and asked the other man to keep his relationship with Jordan hidden. He didn’t explain how he found out and just said that if anyone else learned what they were doing like, their bosses, that Jordan would be the one in trouble. So Cain took Scott’s warning to heart and he ended denying any kind of relationship with Jordan outside of the hospital.

But both Cain and Jordan did have one slip up. They had been called into the hospital to treat several victims of a fire and there was one little girl that came in with just her sister. So Jordan had asked him to watch Shannon because she was treating the little girl that came in high and Jordan had explained to Cain how that could be a trigger for Shannon however Shannon wasn’t someone that talked about her past and she came to regret saying anything to Shannon after Cain got in her way.

Cain would second guess Shannon’s decisions and he would tell her to take it easy on the older sister. However, Shannon knew that something was wrong. She had been asking the older girl, Izzy, to call their mother because Naya wasn’t in good shape and Izzy kept coming up with excuses. So there came a time when Shannon’s theories were proven right and she found out that twelve-year-old was showing all the signs of being a prostitute. The little girl had gonorrhea, she suffered several female complaints seen in pros, and she was high on drugs when she came in.

So both Shannon and eventually Cain had written off the girls’ “mother”. A real mother would have showed up at the hospital and she wouldn’t have pimped out a child whose body couldn’t survive such trauma. Yet, Izzy and Naya’s pimp was a woman named Reese. Reese had apparently met Izzy a couple of years ago after the young girl had run away from home and she took her in and even took her to see things like the Super Bowl, but while Izzy thought that Reese was taking care of her, she was really being trafficked.

Izzy ran away from home at fourteen and she had been with Reese for four years. But Izzy befriended Naya at a gaming convention and had somehow convince the younger girl into going with her. So Shannon was able to talk Izzy into giving up on her pimp and she also found out something else. She found out that the hero fireman that was brought into the hospital after he supposedly saw a fire and ran into help people – was actually a pedophile. Ted Rogers was a known face at the hospital and the news cameras had been running footage of the hero fireman. And it was just a lie.

Ted had been in the hotel when the fire started and he had left a drugged little girl in the room because he didn’t want anyone finding out about his dirty secret. However, Shannon got in touch with the police after Izzy told her everything and the police had found footage of Ted going into a room alone with Naya. So that’s when the press coverage suddenly changed. The hero became a villain and not only did Cain apologize to Shannon for thinking she couldn’t handle their case, but Shannon also was the one that told Jordan about Ted.

Ted and Jordan had once been friends however she later told Ted how despicable he was and had even demanded that he tell his wife Julie everything before the poor woman was forced to find out on the news. Yet, Jordan was able to pull herself together when she needed to and she did that for Kenny. Kenny had suffered some swelling on the spine after a match during an MMA meeting turned into something else. So there were a few hours there when he didn’t he would ever walk again and had fallen apart. And so Jordan and Drew did the best they could to look after him except Drew went too far.

Drew had blamed himself for what happened to Kenny because he was the coach and he had arranged between Kenny and the other guy. However, he hadn’t wanted to accept Locke. Locke was merely Mac’s friend and a fellow veteran so Drew had to be talked into accepting Locke into their MMA Fighting Support Group. So Drew, who had knocked Locke around after what happened to Kenny, had then looked into Locke’s file. He was technically part of Veteran Affairs and so he was able to access it easily yet Locke’s file told him that Locke suffered from psychological problems and that he couldn’t be sent overseas because his CO never thought he was mentally fit.

But Drew had tried to warn Mac about Locke and Mac refused to be swayed. He said Locke reminded him of when he was down and that they still could help however Drew couldn’t do that while his best friend was laid up and Kenny’s situation had taken a turn for the worst when they spoke. Kenny came into the hospital unable to feel his legs and then slowly he couldn’t feel his arms as well. So Kenny had to get a catheter and he had resisted being tubed. He said he didn’t want anyone he knew to do it and so Scott came up with another option for him. Scott has asked Paul’s sister Bella who was visiting the hospital to do it and she agreed.

Bella knew how much Kenny meant to her brother and so she didn’t mind their “unique” introduction because she wanted to get Kenny through his crisis. However, Kenny eventually turned out to be fine because the swelling went down and he luckily regained mobility. So when Kenny had said that he wasn’t upset with Locke and that he wanted to put what happened behind him, Drew decided that maybe he should listen to Mac. He told Mac that he would allow Locke back at the MMA meeting and that he would try to help. And so Mac had done a great thing for Locke yet Locke was too ill to appreciate it.

Locke got it in his head that Mac had betrayed his trust and he had stabbed Mac right there in the parking lot of the hospital.

So Mac’s life is hanging in the balance…