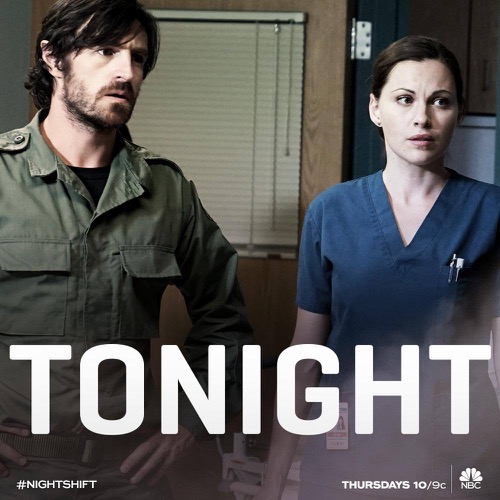 Tonight on NBC their new drama The Night Shift airs with an all new Thursday, August 24 season 4 episode 9 called “Land of the Free,” and we have your The Night Shift recap below. On tonight’s Night Shift episode as per the NBC synopsis, “TC and Jordan accompany a SWAT team on a raid and wind up with an emergency room full of sickened immigrants, including one with murderous intentions; and Scott pulls a dream team together to impress the Colonel in charge of setting up a combat training program. ”

The police are dealing with a hostage situation. The man has another at knife point. He wants them to open the gate to the prison. When they don’t, he takes off in a cruiser, crashing it in to another. Jordan, TC and the others rush to the car and try to help the suspect, who tells them to let him die. Inside, TC is called over by a little boy. His mom isn’t breathing. TC goes to help. The woman has diabetes.

Drew is doing push-ups with Shannon sitting on top of him. Kenny counts while teasing him that he won’t make it. Emergency calls. Dr. Allister is brought in and directed to trauma 2. At the same time the suspect is brought in screaming and threatening the cops. TC brings in a slew of immigrants that are scheduled to be deported tonight. Scott is overwhelmed, but agrees to take them all in.

Jordan finishes talking to TC about a contract while she works on the suspect. TC leaves. He jumps up and yells boo to her. He wants her to jump in bed with him and pass some time. She turns him down with a bit of sarcasm and leaves while telling him that when he wants to be treated to let her know. Alone in the room, the suspect pulls a razor blade from his mouth while signaling to a man outside of his hospital room.

Dr. A talks to Drew about him heading off to ranger school. Dr. A talks about the suspect. He’s scum and gives men like him a bad name. The guy has been deported several times. Paul takes offense to this. Dr. A is brought into surgery for internal bleeding.  Drew asks him why he is angry.

The team gets together. All of their patients are exhibiting signs of meningitis.  Scott tells Shannon to get vaccinated as she works on the woman with diabetes. Her son is there. He knows what they are talking about. He wants to be a doctor. He pleads with them not to let her die. She is all he has. His father isn’t a good guy. They promise him.

At the front desk Jordan and the team talk about a game plan for the patients. The deportation officer overhears. He is mad that TC told him that they have the measles. TC should have let them all stay there and be deported back to their own countries with their diseases. He demands they get on the bus. Jordan tells him no. He will die and so will they.

Jordan gets a call from Cain. He tells her he needs to go back to Mexico. There is an emergency. He quits over the phone. She wants to talk about this. He hangs up and grabs handfuls of money out a safe, stuffing it into a bag along with a gun and passports.

Shannon checks out the young boy. He’s good. He gets upset. They will deport him. Shannon tells him that she will pretend he is sick so he is safe. ICE gives Shannon a hard time when she gets out of the room. Scott confronts the man and tells him that they won’t be releasing anyone who is sick anytime soon.

Paul talks to Dr. A who apologizes for what he said earlier. Paul explains that id he isnt wearing his scrubs he gets mistaken for the janitor. Dr. A tells him how his family thinks he is a traitor for working with ICE. But he started out when it was about deporting the bad guys not families.

The suspect is being wheeled into a room. Officers keep watch. He flirts with Jordan who is very annoyed.

TC shows up while the suspect mouths off. He is there to help out Jordan. She tells him how Cain quit. They bring the suspect up to CT. In the room, the suspect slashes one of the officers when he goes to un-cuff him. The suspect grabs his gun, fires and disappears into the ceiling.

Jordan reports that she has called security to get a map of all the vents. TC is mad that this happened on his watch. TC suggests that Drew and he join SWAT. Jordan announces to the floor that the suspect is on the 4th floor. The vents aren’t connected.

Shannon checks on the young boy Angel. He is passed out in a hospital bed after taking pills. They pump his stomach.  Dr. A asks Paul about Angel. He blames himself. He was the one who arrested them and brought them in. Paul asks what he is going to do to fix it. He explains that he can’t do anything. It’s too late.

The SWAT team sees blood dripping from a vent. They need to bring the suspect in alive. They all aim their guys to the ceiling. They turn on their cameras. They see him in the vents. The head of the SWAT teams wants to go in 5 minutes, but TC thinks it’s a bad idea. He leaves.

Rene, the head of SWAT goes in. She gets shot. TC goes up in the ceiling to rescue her. Jordan and Drew lower her down. TC doesn’t leave, but goes after the suspect.

Cain is pulled over by the police. The man from the hospital gets in the driver’s side and makes him drive with a gun on him.  They take off. The cop leaves.

TC gets his knife ready. He turns the corner of the vent and lunges at the suspect who is too strong. He hits TC with the gun several times; throwing him back and making him bleed. They start to fight again as the SWAT team cuts the ceiling. They both fall. Jordon runs to TC.

A gets out of surgery. He asks about Angel. Shannon wheels him in. They break the news that Angel and his mom can stay after their deportation pick-up was found to be irregular.

Jordan works on TC. They go back and forth about him acting like a hero. Amira shows up and interrupts them. It creates an uncomfortable situation.

Kenny asks Paul to talk. He wants to marry Bella and he wants his blessing. Paul knows how he gets with his emotions and woman. Kenny explains that he loves her. When you know you know. After Paul gives his yes, Kenny goes wild. She already said yes. Paul doesn’t look happy while everyone around them congratulate Kenny.

Scott. TC, Jordan and Amira meet with the Colonel. He agrees to their contract. He will give the group 3 days before he sends along the recruits to be trained for combat zones. It is a lot sooner than they were ready for but Scott shakes on the deal.