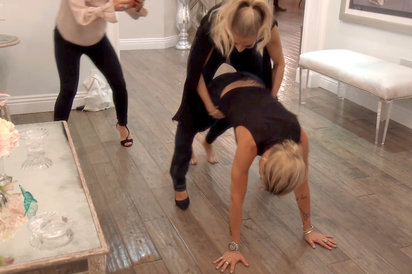 Tonight on Bravo The Real Housewives of Beverly Hills airs with an all new Tuesday, January 3, season 7 episode 6 called “Compromising Positions” and we have your RHOBH recap below. On The Real Housewives of Beverly Hills season 7 episode 6 as per the Bravo synopsis, “With hesitation, Kyle hosts a game night for all the women, leading to compromising positions and laughs aplenty. Meanwhile, Lisa Rinna and Kim reunite, yet their feud continues, plus Dorit and Eileen Davidson exchange angry words.”

This week on The Real Housewives Of Beverly Hills the confrontation between Eileen and Dorit continues at Camille’s house. Eileen says “It has crossed my mind that Lisa V has tried to influence Dorit’s feelings toward me.” They move on to talk about the situation with Erika flashing Dorit’s husband. Eileen tells her “You held your own with the situation with Erika and I thought it was pretty funny.” Dorit says “I brought her panties because I thought it would wind her up and it did.” Eileen says “I have to go, but we will all see each other at Kyle’s game night. Lisa R will be there and hopefully, we can get things cleared up.”

Kyle is preparing a baby shower for Kim’s daughter Brooke. Kim says “My life is amazing and my relationships with my family are amazing and I am leaving all the old stuff behind me.” She tells Kyle “As exciting as it was to become a mom it is twice as exciting to become a grandma. I can’t wait.”

Lisa R and Eden are having dinner. Eden gives her some new crystals to help release negative energy. Lisa tells Eden “It’s not that I don’t have anyone that I’m close to because I have Eileen, but I feel close to you and I hope that you feel a kinship with me too.” Eden opens up and talks about her sobriety and the issues with her parents and feeling abandoned. Lisa R says “We just connect on a deeper level.”

Kyle is planning her game night event with Christian and Cal. She is worried because of the issues that previous parties have had before. She says “This night is going to be different because we are going to have good food, drinks and no Brandi Glanville.” Kim is nervous about attending the event. She comes in and is greeted by Christian. Erika is the next to arrive and she is followed by Camille and Eden. Kim consoles Eden on the loss of her sister. Lisa V is next to arrive. Erika says “Are they going to inspect me to see if I have underwear on every time they come around?”

Everyone is sitting outside when Lisa R and Eileen finally get to the party. The tension between Lisa and Kim is so thick you can cut it with a knife. Lisa is shocked to see Kim there, but she keeps it together and congratulates Kim on her daughter’s pregnancy. There is also tension between Eileen and Dorit.

Once everyone has arrived the games begin with charades. The ladies are split into two teams and one team is sent into the living room while the other team is left outside. When the team outside gets their answer the new game begins. This game is game is called the puppet game. The two Lisa’s are on the same team and they have to act masterbation. Lisa R says “This is her dream.” All of the ladies seem to be having a good time. Kyle says “Finally we have a successful game night. All of the ladies are getting along and having fun.”

After the event is over the ladies are hanging out and talking. Dorit and Eden are talking about swimming in the pool. Dorit wonders if Eden is gay. Eden seems a bit stunned. She turns to Lisa V and says “Did she ask if I was gay?” Lisa V says “Yes she did.” Eden says “Dorit is sexy, but not exactly my style.

Meanwhile, the discussion of pantygate continues. Eileen, Kyle, Lisa R and Erika are all sitting around the table discussing it. Dorit says “Kyle said in the car the other night that she thought that Erika may have unresolved feelings about it.” Kyle is quick to fire back and she tells Dorit “No, no no. I am not part of this.” Eileen also brings up the conversation that she and Dorit had about it in Malibu the day they went for their walk. Erika just can’t understand why this is still such a big deal and says “I didn’t know that my not wearing panties would be such a huge thing.”

The argument continues. Eileen says “We are talking about Erika’s crotch Dorit.” Dorit fires back “You’re the one who brought it up!” Eileen asks Kyle “Are you saying that Erika shouldn’t have felt blindsided?” Erika tells them “I feel like this has become such a bigger deal than it has to be because it was talked about outside of the people outside of the group.”

Lisa R decides that this is the time to address the situation that occurred at Dorit’s dinner party. Dorit says “Don’t you think that Eileen has a way of putting words in people’s mouths?” Eileen gets immediately offended and says “Excuse me. I showed you the text and exactly what was said.” Kim then inserts herself into the argument. Lisa R tells her “My father wasn’t going through anything when I went after you for going after my husband.” Kim says “I never went after your husband. Let’s talk about facts.” Lisa R fires back “Let’s talk about your arrest shall we?”

The whole table is stunned into complete silence. Everyone tries to stop the arguement from desintegrating any further. Lisa R says “The truth is that it was a low blow. She low blowed and I low blowed back.” Eden says “Kim you’re a sober woman right?” Kim says “Yes.” Eden tells her “Then you need to come at her from a place of love.” Kim tells Lisa R “I’m really hurt. All I really want from you is a sincere apology.” Lisa R tells her “I am sincerely sorry if I ever hurt you. I never meant to.” Kim accepts her apology.