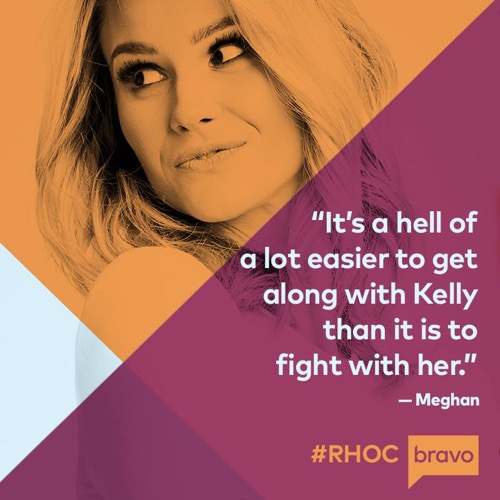 Tonight on Bravo TV the original housewife series, The Real Housewives of Orange County returns with an all-new Monday, July 31, 2017, episode and we have your RHOC recap below.  On tonight’s season, 12 episode 4 called, “We Have a New Puppet Master,” as per the Bravo synopsis, “While the fallout from The Quiet Woman leaves Shannon and Kelly both stunned, the ladies move on with their lives as Shannon takes her daughter Sophie out for a driving lesson and Kelly looks to improve her love life from the inside out. A”

Kelly and Micheal are talking about the incident between her and Shannon at the Quiet Woman. Michael tells her “I think you and Shannon could be friends if it weren’t for Tamra.” Kelly says “Yeah it’s almost like Shannon suffers from Stockholm Syndrome when it comes to  Tamra.”

Lydia’s mom Judy has decorated her house beautifully for her sons birthday party. Lydia is very pleased. She tells her mom “Everyone is coming, but I don’t think Vicki is bringing Brianna.” Judy is very upset. She tells Lydia “The incident with the sofa was five years ago. I just want to let it go.” Lydia also tells her mother “I went out to dinner with Shannon and Tamra and kind of made up with Shannon, but then my friend Kelly came by and a whole new fight broke out. It had the whole restaurant looking at us. I don’t think I want to invite them because I want my sons birthday party to be peaceful. I don’t want any plates being thrown or anything like that.”

The day of the party arrives and everyone is there having a great time. Peggy and Danko arrive and Kelly immediately goes over to apologize. She tells her “I’m so sorry for everything that happened at the restaurant.” Peggy accepts the apology. Vicki is amazed by her ring. She says “It’s bigger than my house!” After the kids are ushered off to a movie premiere the ladies are in the kitchen talking. Kelly asks Peggy about her mastectomy, Peggy tells her “I don’t have cancer. I did it to prevent cancer.” Vicki decides to stay out of that conversation because of the incident with Brooks.

Vicki goes with  Kelly to a vagina rejuvenation appointment, She says “I don’t want to see or smell anything!” Kelly just laughs. Vicki is freaked out. She says “Maybe I should just leave.” Kelly tells her “It’s better that you’re here. I couldn’t do this with Micheal. It’s like maintenance. He doesn’t need to see this.” When the Dr is done she tells Kelly “Now the only thing is that you can’t have sex or use tampons for the next seven days.” Kelly laughs and says “That shouldn’t be a problem.”

Shannon is teaching her daughter Sophie to drive, Once they get in the car and on the road the lesson quickly goes down hill. Shannon says “I am an expressive person and talk with my hands.” This becomes evident when they are in the car. Shannon and Sophie argue in the car all the way home. Shannon tells her “You need to watch the road and be aware of what’s around you.” Sophie becomes exasperated and tells her “Mom you’re making me nervous!”

Kelly goes to visit Meghan for the first time since Aspen’s birth. The two friends had a falling out because Meghan accused Kelly of dating someone and Kelly fired back by texting Meghan that Jim was having an affair while she was seven months pregnant. Meghan says “Sometimes I see Kelly as a child having a temper tantrum. I have to push her away and bring her back in.” Kelly is very excited to see Aspen. Immediately upon seeing her Meghan comments on her dress. Kelly laughs it off and the two friends hang out for a bit.

Vicki and Kelly go to hang out with Peggy. Peggy’s husband tells Kelly “Whatever you said to Peggy really touched her.” The three ladies sit down and talk. Peggy tells them “It was hard to lose my mom and that drew me closer to my dad. Then I lost him too.” Vicki tells her “I was at Shannon’s house when my daughter called me to tell me that my mom died.” The ladies seem to bond over this.

Tamra is having struggles of her own. She is trying to write a speech for an upcoming charity event. She is in the kitchen talking to Ryan about his stepdad Simon and his sister. He tells her “I had a stepdad who was an asshole, but I know now it was because he wanted me to do well.” Tamra is emotional because she got to see and hug her daughter for the first time in years on a fluke when she dropped Ryan’s fiance Sarah off and her daughter was there.

Tamra is both excited and nervous for the charity event. Her mom and dad are there and she can relate to her feelings because her father left her mother for her best friend. Tamra’s mom decides to bail when her dad shows up and this upsets Tamra greatly. Tamra says “Being erased from your child’s life makes you feel like a bad parent.” She is talking to people at the party about the situation in her family. She is still very upset that her mom bailed on her. When she is introduced to give her speech she asks her dad, son and brother, to join her on stage.  Tamra courageously gives her speech and the room applauds. Eddie is super supportive of her.