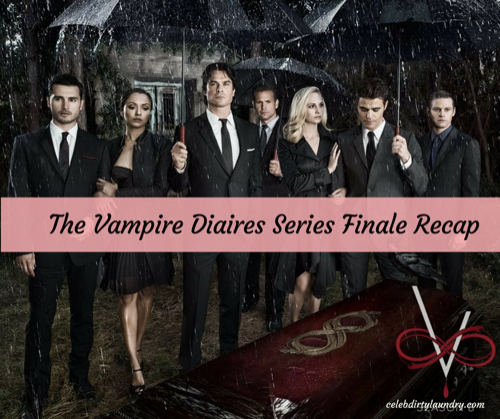 The Vampire Diaries series finale begins with Stefan (Paul Wesley) trying to revive Bonnie (Kat Graham) after she used too much magic to save Caroline (Candice King) and Alaric’s (Matthew Davis) twins from the house fire. Caroline attempts to feed her some blood but she doesn’t take it.

Bonnie is wandering through the forest and she sees Elena (Nina Dobrev) laying in a white bed. They hug each other, but quickly realize this is not how its supposed to be, Elena encourages her to go back but she says she wants to be with Enzo (Michael Malarkey). Enzo arrives and says he isn’t ready for her, its not her time to come to him; he forces her back to live. Bonnie reveals she saw Elena.

Damon (Ian Somerhalder) fights with Vicki Donovan (Kayla Ewell), throwing her out the window. Matt (Zach Roerig) is mad that he did it, but Damon tells Matt that she is already dead and now Matt is in charge of making sure she will stop ringing the bell. Damon leaves as Matt argues with her that Mystic Falls is her home too.

Instead of convincing her, Matt orders an evacuation of the town. Damon and Stefan arrive home to find the coffin open and Elena hugs Damon until he realizes she is actually Katherine (Nina Dobrev). She says it has been a blast watching them fight Cade (Wole Parks) since she had him wrapped around her finger. She jokes about who is going to be the one who dies burning in Mystic Falls with her.

Matt reveals to his father, Peter (Joel Gretsch) that Vicki is the one ringing the bell. Caroline packs up the things for the girls but Alaric reminds her what its like to live without your mother. She tells him to go ahead to the armory and he will never have to tell them that.

She needs to help Damon and Stefan find Elena before the bell rings for the last time at 10pm. Stefan finds her body but is stuck inside the room as the bell strikes at 9:30. Stefan calls Damon to get Katherine to break the spell, but she can’t because Kai (Chris Wood) set the trap for her, but he is indisposed. Katherine says she is about to have everything she wants as soon as the last bell rings the whole town will go poof.

Damon throws in her face that she is doing this out of jealousy over Elena because both him and Stefan would choose her every time; she throws back that Elena would always choose Stefan. She notes that she is sure of it because any woman would because Stefan is the better man; Damon stabs her again.

Stefand and Caroline call Alaric and Bonnie who say they can’t return to help them. Alaric tells her to take the tunnels to get out; Stefan says he has to try to talk to Damon. Caroline says she promised Alaric she wouldn’t leave them motherless. Stefan says he has to stay because Damon is his brother; she agrees that family comes first. They exchange I love yous and go their separate ways.

Bonnie understands that Alaric cares about Damon and Elena, but his girls need him. Bonnie says if there is something they could do, they would do it. Bonnie sees the project Dorian (Demetrius Bridges) and Alaric were working on; saying it needed a few volts of mystic energy to destroy Cade’s hell; Bonnie asks if its like the energy contained in hell fire?

Bonnie calls Stefan, and explains what he needs to do in order for Bonnie to destroy Katherine while she is in hell. Matt continues the evacuation with only 10 minutes to go. Bonnie talks to the twins, Josie (Lily Rose Mumford) and Lizzie (Tierney Mumford), asking them for a little luck to do what she needs to do.

Caroline arrives just in time, Alaric promising he will explain on the way and Bonnie tells her she will save the world but she needs to go right now; promising she will be fine!

Katherine visits Damon in the cave, filled with candles. Katherine says there is nothing Bonnie can do. Damon explains that Bonnie plans to put the hell fire in the tunnels they are in, and he looks forward to dying by her side in hell. She thinks he is bluffing, but Stefan says he isn’t leaving either.

Damon tells him to tell Elena he loves her, and they argue about who is going to stay there to make sure Katherine ends up destroyed in hell. Stefan says he owes it to Bonnie and Enzo and for Damon.

Stefan says Caroline, his new wife, is waiting for him to come home alive; but he begs him to do it for him then. Damon tells him he loves him, Stefan says it too, but Damon compels him to leave and not come back until his death uncompels him. Stefan walks away.

Matt and their father, Peter come up to see Vicki, they don’t want to stop her ringing the bell but Peter just wanted to see her one last time. Meanwhile Alaric explains what Bonnie is going to do, and she begins to cry.

Bonnie lights candles inside the armory, she begins chanting as Vicki walks over to ring the bell for the final time. Caroline orders Alaric to stop the car, she calls Stefan and only gets his voicemail. She says she understands and she loves him forever. She smiles and says she understands.

Vicki rings the bell for the last time, fire explodes through the windows but Bonnie is able to draw it through the tunnels, as it approaches her she fights it and is determined she can beat it, saying it is not her time.

Enzo arrives by her side, and tells her she is finally ready to live, telling her she is strong enough to do it and she isn’t alone. She looks to the other side and her grams is beside her, the whole Bennett coven shows up and together they destroy the hell fire, bringing it back into the Maxwell Bell. Bonnie says, “I did it!” and she passes out on the floor.

The bell rings at the school, where Elena is looking into the award wall at the highschool. She runs into Stefan who doesn’t know why she is there right now. He says he doesn’t know about Bonnie but Damon sacrificed everything to save her and everything in this town.

He reveals he is human and knows better than to walk around this earth without vervain. He went back and injected Damon with his blood, so Damon is okay, but Stefan stayed behind to die with Katherine.

Stefan says tonight he got to see the older brother he knew as a boy and he wanted Damon to live, and wanted her to get to know him. He says he is the better man and the right man. He tells her it was good to see her one last time and they hug goodbye. He whispers something in her ear and she nods; he walks out the door, saying it feels epic.

Elena awakens to Bonnie by her side. Bonnie says she broke the spell, saying it took some times but she figured this witch thing out. Elena asks where he is, she says with Caroline, saying goodbye.

They are at the crypt, where Damon asks if peace does exist? She says she does and she will see him again; Damon says not him, as he is probably going the other way; Caroline tells him to not be so sure. Caroline walks out to see Elena and Bonnie waiting for them. Elena and Damon run to each other, kissing and smiling.

Elena reveals that when Stefan died he whispered to her to let Caroline know that he heard her, and he will love her forever too. Caroline cries that he got her message. Each of them leave mementos at the crypt for Stefan.

Matt says Mystic Falls is safe and he remains the Sheriff and he feels Vicki found peace as she walks away with Tyler (Michael Trevino). Bonnie is determined to keep her promise to Enzo and live this life to its fullest, see the world and enjoy her life. She finds her passport and the necklace with his blood in it and she can feel him touch her face.

Alaric reveals that Caroline and he followed Stefan’s wishes and opened a boarding school for children with gifts, like the twins. He sees a glimmer of Jo as the twins play. Caroline reveals they needed a lot of help with the school so Jeremy Gilbert (Steve R. McQueen), and Dorian join as staff due to their experience. Caroline also feels her mother’s presence.

Klaus Mickaelson (Joseph Morgan) becomes a big contributor and donor to keep the school open and going. Elena remains in Mystic Falls and writes a diary at Stefan’s grave. After finishing med school she returned to Mystic Falls because it is where she wanted to grow old and she did. That is her life, weird complicated and messy, bad, good, amazing and above all EPIC; and she owes it all to Stefan.

She is packing up her books and grabs hold of Damon’s hand as they walk away from the crypt. She worries about Damon feeling there is no such thing as peace and he will never see his brother again, but she disagrees.

The end is when Elena has died and runs up her front steps into her father and mother’s arms; that is the promise of peace, after a long life you will see each other again. Stefan stands in the Salvatore house and welcomes his brother Damon home when he dies as well.