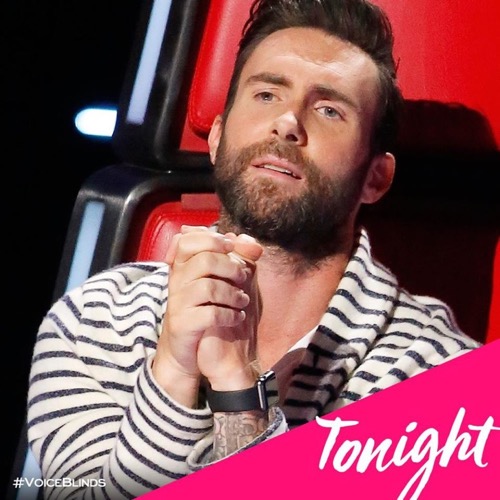 Tonight on NBC’s Emmy Award-winning musical competition The Voice premieres with an all new Thursday, March 2, 2017, season 12 episode 3 and we have your The Voice recap right below.  On tonight’s The Voice season 12 episode 3 episode as per the NBC synopsis, “The blind auditions continue with Blind Auditions Night 3.”

The show starts with Blake talking trash to the other coaches. Ashley Levin is 23 years old and is from Florida. She is the youngest of 4 kids. Her father has recently been diagnosed with Alzheimer’s disease. Ashley sings and writes songs which have helped her deal with her father’s illness. She sings “Let Him Fly” by Patty Griffin. She hopes to make her dad proud. All the coaches but Adam turns their chair around. Gwen tries to make her case by insulting Blake. Blake and Gwen banter back and forth but Alicia interrupts to say she offers something they don’t. Ashley picks Blake.

31-year-old Brandon Royal is from the Virgin Islands and is currently a fire fighter and EMT in Florida. He hasn’t performed in front of an audience in over five years. He sings “Master Blaster” by Stevie Wonder and both Blake and Gwen turn around to fight for Brandon. Blake tells Brandon that he has brought more singers to the winner circle than all the other coaches combined. Alicia says that is because Blake is 80 years old. Gwen tells Brandon she has experience with Ska, Rap and Hip Hop and thinks she can help him fine tune his style. He wants to be on Gwen’s team.

Adam Pearce is 31 years old and is from Louisiana. He started playing music to try to impress his wife. He plays 4 to 6 nights a week and loves it. He has been playing for 12 years and is ready to make it big. He would love to work with Adam Levine. He sings “Whiter Shade of Pale” but none of the coaches turn around. Adam tells him he was just too pitchy. Blake encourages him to come back in the future.

Blake asks Adam if he stole his sweater from an old woman in a wheel chair. Julian Martinez id 21 years old and grew up in California. He was diagnosed with ADHD when he was a kid and now works as a para-educator. He never fit in growing up and music was his way of coping with adolescence. He sings “Pride and Joy” by Stevie Ray Vaughn. Blake and Adam will battle it to get Julian in their team. Blake tells Julian he has the greatest scream in music, even better than David Lee Roth. Julian picks Adam while Blake continues to insult Adam’s sweater.

Quizz Swanigan is 13 years old and is from Arkansas. He has performed in several tribute bands of the Jackson 5. Both of his parents had to leave their careers behind when his family recently moved to Los Angeles to help him reach his dream. Quizz sings “Who’s Lovin You” and Alicia and Gwen turn around at the same time. Alicia tells him she could feel his heart as he sang. Quizz brings his whole family on to the stage and Alicia becomes his coach.

Tennessee native, Casi Joy is 26 years old and brings her mom, dad and boyfriend with her for her audition. She sings “Blue” by Leann Rimes. Alicia asks Blake not to turn around if the next performer is a country artist but he says “no promises”. Gwen turns around immediately followed by Alicia, Blake then Adam. Gwen tells Casi her performance was magical. Adam says he would jump over the moon to have her on his team. He says he has been so beaten down that he won’t even get his hopes up. Alicia encourages her to go with the newest coaches on the panel. Blake wins as Casi’s coach and he tells her she is unbelievably talented. The other coaches are upset at Blake’s win.