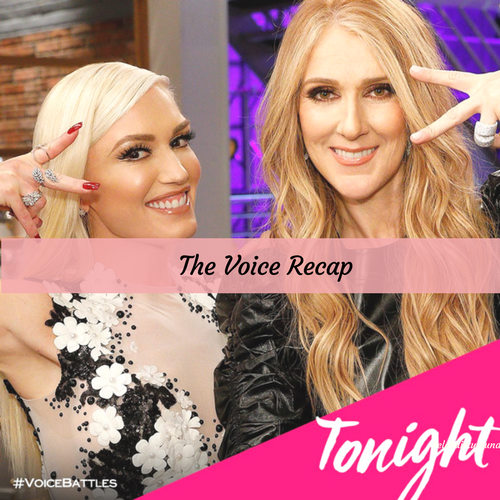 Tonight on NBC’s Emmy Award-winning musical competition The Voice premieres with an all new Monday, March 27, 2017, season 12 episode 12 and we have your The Voice recap right below.  On tonight’s The Voice season 12 episode 12 “Battles, Part 4” as per the NBC synopsis, “The battle round concludes. The advisers are Luke Bryan, Celine Dion, DJ Khaled and John Legend. Included: Alicia Keys sits down at the piano to help her artists; Adam Levine and John Legend help an odd couple find common ground; and Celine Dion choreographs a performance.”

First up is team Alicia Keys and DJ Khaled with their final battle between 17-year-old Lauryn Judd from Utah and 26-year-old Lilli Passero from California. Both are very excited to work with Khaled. Lauryn talks about her junior year in high school while Lilli says that she is an actor and singer at heart but is forced to wait tables to pay the bills. Alicia encourages Lilli to work on her breathing. Lauryn needs to pay attention that she hasn’t had the life experiences that the song expresses.

Lilli took the battle for Gwen. Adam felt that life experience gave Lilli a slight edge and thus he would have to go with her. Blake also picks Lilli. Alicia saw a different side to both women during the performance and felt they both displayed true artistry but she picks Lilli as the winner of the battle. Lilli will represent Alicia in the knockdown round.Adam Levine and John Legend work with

Adam Levine and John Legend work with 34-year-old Jesse Larson from Minnesota and 25-year-old Taylor Alexander from Tennessee for the next battle of the evening. Taylor started out in a punk band but switched to country soon after. Jesse has worked with Prince opening for Judith Hill. He is thrilled to have this opportunity. They will sing Shameless by Billy Joel for the battle.

Blake thought Taylor really stepped up and won the battle. Alicia really can’t decide and leaves it up to Adam. Gwen thinks Taylor looks like the perfect cowboy but she would go with Jesse. The winner of this battle is Jesse and he moves on to the knockout round.

The finally battle of the night is between 31-year old Brandon Royal from Florida and 23-year-old Davina Leone also from Florida for Team Gwen Stefani and Celine Dion. Davina has a huge following YouTube and is thrilled to work with Celine. She is fluid in French and she and Celine have a fun conversation in French. Brandon loves Reggae and Calypso and had been working as a firefighter for 2 years.

Celine encourages Davina to show attitude because she can see Brandon has the moves. Davina has to be confident and not back down from Brandon. Brandon says he will never wash his shirt again since he was touched by Celine. They sing In The Night.

Adam thinks Brandon is on his way for big, big things. Blake would pick Brandon if he has to choose between the two. Alicia loved Davina’s energy and Brandon’s voice control. Gwen decides Brandon will go on to the knockout round for her team. Adam steal Davina for his team and she is speechless.