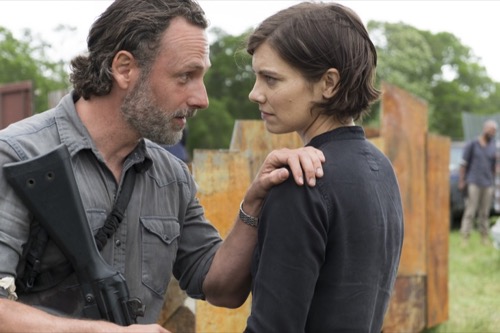 Tonight on AMC our favorite show The Walking Dead airs with an all-new Sunday,  October 22, 2017, episode and we have your The Walking Dead recap below.  On tonight’s The Walking Dead Season 8 episode 1 premiere called,  “Mercy,” as per the AMC synopsis, “In the Season 8 premiere, Rick and his group, along with the Kingdom and Hilltop, band together to bring the fight to Negan and the Saviors.”

Tonight’s premiere begins with Rick staring at a grave and suddenly we see a cane leaning on a wall. We are then brought to see Rick (Andrew Lincoln) stands to watch at the cemetery the group created, while his group, along with the Kingdom and the Hilltop, are busy preparing for their war with Negan (Jeffrey Dean Morgan) and the Saviors. He then gathers everyone and talks about how the bigger world is theirs by right; Carol (Melissa McBride) and Tara (Alanna Masterson) smile at each other, as Rick says only one person has to die and he will kill him, himself.

Meanwhile, Dwight (Austin Amelio) reads a note that says, “tomorrow” on it; he responds and uses the crossbow to shoot it back to Daryl (Norman Reedus). Carol and Tara are timing something as Tara marks it down. Ezekiel (Khary Payton) and Maggie (Lauren Cohan) also speak to everyone about keeping faith in each other, and if they can hold onto that, the future and world is theirs.

Carol and Tara sleep as a herd of walkers walks under the bridge pass they are on. Rick looks again at the graves. We are suddenly in a room where there are flowers and a cane, with a long-bearded Rick lying in bed.

Carl (Chandler Riggs) drives a van until there are too many vehicles blocking the road, he gets a gas tank and finds several cars with skeletons inside at an old gas station. He hears someone talking and raises his gun; he begins to follow the voice and finds the man who is speaking. He tells Carl that all he wanted was some food, but a gun rings out and it was Rick.

He chastises Carl saying it could have been one of them and he shot over his head. Carl tells him there isn’t enough of hope when Rick says if he isn’t one of them, he hopes the guy makes it. Someone is crossing out a list of killing people, first, it was a platform lookout in a tree and then neighborhood is crossed off. Morgan (Lennie James) takes out a man outside the urgent care clinic.

Father Gabriel (Seth Gilliam) comes to see Rick, informing him that they will be ready in 30 minutes. Rick says this isn’t about him, but Gabriel tells him he made it like that. Daryl arrives at where Carol, Tara, and Morgan are. Rick kisses Michonne (Danai Gurira), Judith and says, “this is the end of it” to Carl before he leaves with the united groups in their armored vehicles. Carl admits to Michonne that he wanted to go with them too as she says everything hurts but she will help him defend this place as this is “his show”; assuring him things will be okay.

Rick takes down another lookout but doesn’t kill him. He mocks Rick, reminding him that he saw him crying and tells him that his boy is going to die. Rick marks another spot off his list and then lets the walker go so he can eat the man, then waves for the vehicles to come forward.

The groups gather in a field at sunset, some shocked that others would defend people they have never met. Maggie, Rick, Ezekiel, and Jesus (Tom Payne) talk about one more fight. Maggie says she will be there, at least for one more fight as she is about to go into her second trimester. Ezekiel reveals that he knows the obstetrician died at the Hilltop and offers Maggie to come to the Kingdom as they have a doctor for her; Jesus tells Ezekiel they will get theirs back.

Ezekiel says as sure as the day defeats the night; on this day they begin to reshape this world for Maggie’s child and the children to come. Rick tells Maggie, the Hilltop is lucky to have her and after this, he will be following her.

Tara counts down, but nothing happens right away; everyone looks at each other until Daryl points over the pass; another herd of walkers approaches, and they take off, a few moments later the vehicle they left in the middle of the highway explodes. The Saviors take off towards the explosion as Dwight is told they want blood, he tells them hopefully they will get lucky.

Daryl tells the others they are close, as Dwight lights a cigarette and leaves as the lookouts on the roof are killed; walkers on chains line the roads as the armed vehicles arrive. Maggie raises her hand after Rick nods and everyone shoots off several rounds from their guns before hiding again. Negan comes out of the door, saying he is sorry he was in a meeting and smirks as he holds Lucille on his shoulder.

Rick wakes up with the long beard on his face, looks at his watch and gets up. He scoffs, jokingly, at Michonne for turning off the alarm. Carl walks by saying they are all playing hooky.

Back at the Saviors’ home, Negan says he cares about his people and doesn’t want to march them into the fire to simply play whose dick is bigger. He certainly isn’t going to let his people die over that like Rick is about to. Rick calls out all of their names, ordering Eugene (Josh McDermitt) to be quiet because he knows who he is. Rick tells them to surrender, and can only guarantee their survival for this moment.

Morgan runs off after a lone walker because they are afraid it will “set it off.” Negan makes fun of the deal, as Rick says he told him twice about what is going to happen. Negan tells Rick he has no clue what is about to go down, asking him if he really thinks he has the numbers for this fight; saying he doesn’t. He sends Simon (Steven Ogg) inside and retrieves Gregory (Xander Berkeley).

Gregory orders all those living on the Hilltop, they will no longer be welcome in the colony as they are to side with Negan and if they don’t comply, their families will be thrown out to fend for themselves and if they don’t go home now, they will not have a home to go to. Maggie tells them all to do what they need to do; Jesus says they only have books to go back to there. Jesus informs Gregory and everyone else that the Hilltop stands with Maggie.

Morgan kills the walker as Simon shoves Gregory down the stairs saying he invested a lot in him and is very disappointed. The Saviors drive right into the trap and their cars explode, everyone acknowledges what happened and Negan sees it. Rick tells his men to make a choice, it has to happen now as it is the only way. Rick starts to count down from 10, as Negan smiles but when Rick hits 7, he begins to shoot at them.

Negan and his men run for cover, everyone continues to shoot out all the windows in the building. Morgan walks back to Carol, Tara, and Daryl; Tara and Morgan leave, Carol hugs Daryl and tells him to be careful, Carol walks away, leaving Daryl sitting on his motorcycle.

Maggie screams for everyone to go, they begin to get in their vehicles and when Daryl hears the car horn, he causes another explosion as he rides off. Daryl shoots off several explosions on his way, as others continue to shoot with Rick. The herd of walkers follows the explosions and Rick have the RV ride towards the building and presses the detonator when Father Gabriel tells him he’s safe.

Carl walks towards the gas station with a backpack, he removes cans of food and a note that says “sorry” as the man who called out for food earlier watches from the bushes. Ezekiel sees Carol, bows a little and smiles. Daryl reunites with Rick, who says they have tomorrow but Rick says they can’t as Negan came out to get him. Daryl asks Rick if he is okay and he tells him he is, and this isn’t about him.

Morgan talks to some in the group who aren’t so sure about what will happen now. Carol and Ezekiel lead some of their people into the research area, someone throws a grenade, opening the doors to all the walkers who were stuck inside the clinic. Father Gabriel struggles to get away from all the walkers, he manages to get inside a building, finally hoping to be safe; but a voice comes out, saying he hopes Gabriel is wearing his shitting pants because he is about to shit his pants. Its Negan and they are surrounded by walkers, desperate to get in from all angles.

Judith comes in to see her bearded father in the kitchen, saying people are making a big owl for the festival. Michonne says people are taking this festival seriously, a wounded Rick takes a walk outside with Judith to see people working in their gardens and happy.

Rick tells everyone in the field that they don’t have to wait for it anymore and they are starting tomorrow, right now. If they start tomorrow right now, no matter what comes next – they have already won. Everyone cheers!