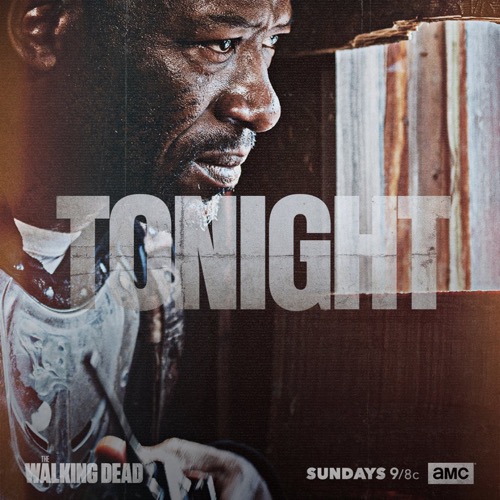 Tonight on AMC our favorite show The Walking Dead airs on an all-new Sunday,  December 3, 2017, episode and we have your The Walking Dead recap below.  On tonight’s The Walking Dead Season 8 episode 7 called, “Time for After,” as per the AMC synopsis, “Negan has to enlist the help of his lieutenants in solving a huge issue facing the Sanctuary. Rick and the group continue to enact the plan.”

The Walking Dead begins tonight with the container suddenly being opened that Rick Grimes (Andrew Lincoln) was being held in, when he sees Jadis (Pollyanna McIntosh) he tells her that the offer still stands and it isn’t too late for her to join them, or her and her group can die. She takes several pictures of Rick in only his boxers and tied up. She tells him the photos are to sculpt him for after; but doesn’t explain any further as they re-lock the doors.

Eugene (Josh McDermitt) paces his room, then settles and begins to make a list of “What I know”, “What I don’t know” and “Things I am unaware of wholly.” He tosses the book on his bed and goes to see Dwight (Austin Amelio) informing him that he knows he is the traitor and that Negan (Jeffrey Dean Morgan) has ordered him to find out who the traitor is, insisting that Dwight stop what he is doing immediately and in exchange he offers to remain silent.

Dwight grabs Eugene, sits him on the bed and tells him that Negan is finished, the Saviors are finished and this whole place, and what it has been is all over. Food and water is running low, workers are running scared and the place is going to fall; all Eugene has to do is stay inside and do nothing but wait and let it play out. Dwight reminds him he has no blood, nor burnt skin on his hands but it is coming, and once he has done those things; he becomes those things and there is no going back nor forgetting it. Eugene says they are not perfect, but they are saviors and they save but Dwight’s cloak and dagger is on the QT, but all he asks is that no harm comes to the people inside the walls and he will remain quiet.

Eugene watches as the workers bar the doors as there are walkers surrounding the building, telling him that they have maybe a day or two. He is called in to help with Father Gabriel (Seth Gilliam), saying that this is his own fault as he was a part of the campaign. He is told to sit with him, while they try to find herbs or something for him. Gabriel asks Eugene to sit with him, he gives him some water and informs him that he doesn’t see any way to get Dr. Carson out of the building because of the walkers.

Gabriel asks for him to only do the right thing and that it only requires faith and trust in himself. Eugene feels it is absurd that God is inside of him, guiding him and having a plan for him; Gabriel says it is so hard to believe when not too long ago they couldn’t believe the dead could walk. He tells Eugene that when the time comes, he could know and may act on it; Father Gabriel falls back into the bed as Eugene sees the red paint on his thumb still.

Morgan (Lennie James) is looking through his scope on his rifle when a call comes through on the radio saying they got something like a truck but lost visual at the water tower. He shifts location and reveals it is Daryl (Norman Reedus). Eugene is given another bottle of alcohol, hoping it will help him sleep but after his refusal to help others, is told it won’t help his conscience. Laura (Lindsley Register) comes to the door, telling him Negan wants him.

Daryl and Tara (Alanna Masterson) watch and wait, as she is sure their people will be at the Sanctuary soon, demanding their surrender. Daryl says this is why they do it. Michonne (Danai Gurira) and Rosita (Christian Serratos) are with them as they work out details; Michonne and Rosita will cover them with cross fire from the upper windows as he drives the truck through the walkers and into the building, making it an open buffet for the walkers. Morgan appears, saying they have him and other snipers too; telling them he wants the Saviors gone.

Tara and Daryl are on the same side, while Rosita says she believes in Rick Grimes and this is too risky, feeling they should wait for him to talk to the Scavengers. Rosita informs them she is out, and Morgan tells her how to get out of there; she is shocked that Michonne would rather risk to get it done than to sit back and wait. She reminds her that it took Sasha (Sonequa Martin-Green) jumping out of the coffin to see the risk wasn’t worth it.

Negan meets with Eugene, reminding him that if things don’t get fixed soon, a lot of his people will die – not him, but others. He doesn’t want to see it happen and the only reason Eugene is around is because he is a strong person because of that “spongy” organ between his ears. Negan shakes his hand, informing him it is a sign of mutual respect and not many people get that from him and tells him there is a lot of work that needs he needs to do; Eugene leaves.

Back in his room, Eugene takes apart a speaker and inspects it, he then searches the warehouse and finds a coffin. He quickly looks away when he remembers Sasha jumping out of her coffin. He gathers up his courage and opens the coffin and finds Sasha’s iPod. Outside, Morgan tells Daryl to cut the engine, or he will draw walkers from the yard; he orders his snipers if they fire from the windows for them to fire back.

Tara leaves the cab of the truck as Daryl asks Michonne if she is up for this. She doesn’t know if things are going to work in the future but she knows things are working now and maybe they need to trust that things will keep working but she feels what they are about to do isn’t worth risking; Daryl disagrees as Michonne says she can’t do it. Daryl tells her she shouldn’t and she also exits the truck. Tara and Michonne exchange looks before she goes to Daryl and says they have more than just the snipers and they can do this.

Eugene is on the roof with his audio glider he created, hoping to redirect the walkers with the sound. He is about to begin when Dwight orders him not to turn around. Tara rushes towards the edge of the fence, informing Daryl and Morgan she is ready; they are prepared to protect her as Daryl approaches with the truck. Dwight raises his gun at Eugene, ordering him to back away from the audio glider; he says he is attempting to save people’s lives and killing him will kill a great deal of people. Dwight reveals he is working with Rick, Daryl, Rosita and all Eugene’s former friends in order to keep them and all the people there alive; saying they can get rid of JUST Negan.

Eugene says he can die by Dwight’s gun or take his chances and die by Negan’s gun. He starts the audio glider as Dwight looks on. Daryl steps on the gas towards the building as Dwight shoots down the audio glider instead of killing Eugene. Morgan tells Daryl and Tara where to escape as the walkers make way into the Saviors’ Sanctuary. Eugene watches in horror as guns go off and the walkers begin to kill the workers inside. In fury he goes to Gabriel’s room, telling him he will keep Dr. Carson there and keep him alive as it is in his genetic make up to keep himself alive.

Eugene comes to see Negan, informing him of everything. He promises to make him as much ammunition as he will need to take down Rick and everyone else. Negan asks him how it feels to be the second most important person there and how does it feel to save those people? Eugene also tells him there is another problem solved; but before they can finish their conversation, Negan’s “counsel” barges in.

Negan says that Eugene has a way out of this mess and even a topper to it all; he looks at Dwight, then says he can get the intercom system working, that will change the communications completely within. He leaves as he continues to hear the gun fire outside. Eugene opens the bottle of alcohol and after quickly drinking it back, he gets sick, but doesn’t stop him from finishing the bottle.

Rick is brought out of his container again and forced on his knees, as Jadis brings out a walker whose head is covered with a metal mask and steel bars. Rick begins to beat the men who brought the walker out, as an angry Jadis looks on. When she has had enough, Jadis pulls out her gun and fires several shots at Rick but misses; he throws Jadis to the ground, placing her head right beside the walker’s head that is now on a spike, still trying to bite.

He informs those around him that he is walking out now, and if he does, all of them are going to die as he has a lot of people and they may not attack today, but they will attack. They can play their games, sculpt whatever they want; but he is leaving and suggests after that, they should just run. They lower their guns as Jadis submits to him; he helps her up and she asks him if they join him, what then? Rick explains they will go to the Sanctuary and ask the Lts to surrender. Negan is his, alone, to kill; they compromise and Jadis and her people will get a fourth of everything. She tries to get him to agree to sculpt naked for her, but he is angry, demands his clothes and boots.

Rick brings Jadis and her people in; he calls for the snipers, but no one is responding, causing some concern. Rick climbs the water tower, looks through his scope and finds that the Sanctury is empty.