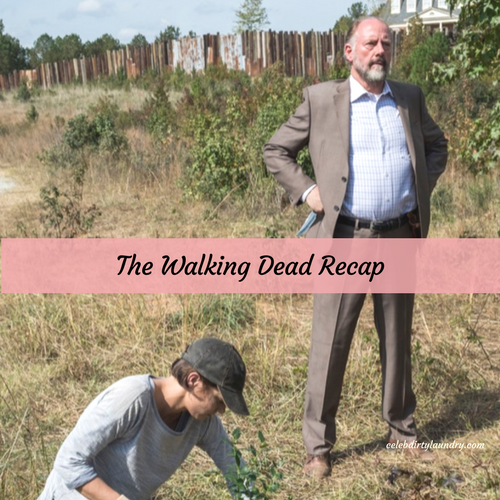 Tonight on AMC our favorite show The Walking Dead airs with an all-new Sunday,  March 26, 2017, episode and we have your The Walking Dead recap below.  On tonight’s The Walking Dead Season 7 episode 15 called, “Something They Need,” as per the AMC synopsis, “A group of Alexandrians embark on a journey to a distant community; and one group member must make a heartbreaking decision.”

Tara talks with Carl and the group about her past visit with the women of Oceanside, she shares with them that they have lots of guns and leads the way.

Maggie is gardening and instructs one of the Hilltop Residents on what to do in the garden while Gregory watches.

Meanwhile, Rick is helping Michonne to climb a tree.

Sasha is in a locked room, David, one of Negan’s men, introduces himself and asks her if she remembers him from the night before. Sasha says no. David says that he supplied the rope to the guys who tied her up. He tells her that if he gives her some water, will she do something for him. Sasha doesn’t answer, he rips her t-shirt and whispers into her ear to tell him how thirsty she is. Sasha tells him to go to hell and head butts him. David says that fighting will only make it last longer when Negan walks in. Negan asks David if he was trying to rape Sasha. Negan then pulls out a big knife and puts it right through David’s neck.

Negan takes the ropes off Sasha’s hands, then he says he remembers her. Negan tells her that she is brave to come after him and asks if Rick put her up to it. Sasha says no. Negan leaves the knife with her and tells her that it is hers, to slit her wrists or kill him. Negan tells her he is sorry she had to see him kill David, but they are not monsters.

Eugene visits Sasha in her cell, he brings her some supplies and tells her that there was some debate about his visiting her. Eugene tells her to join Negan’s forces like he did, he begs her to say yes. He goes on to try and convince her, she tells him to go.

David is still in the cell with her and he is starting to turn.

Maggie is outside the walls digging out a blueberry tree when Gregory walks up. He asks her where her friends are and she says they have gone to look for something. Then, Gregory asks her why she is still there since Carson is gone. Maggie mentions the fact that Carson is supposed to return and asks Gregory if that is true. Gregory tells her that she needs to trust him and that they should work together. Maggie says that it is never too late to change and if he wants to talk more, she will go see him when she is finished her planting. Then, Maggie says that the planting is taking longer than she expected and asks Gregory to watch out as she finishes it. He says yes, then pulls out a knife and gets closer to her back – he looked like he was going to kill her, but he doesn’t. A walker approaches, Gregory says he has it, but can’t do it and Maggie goes to do it instead. All of a sudden, a second walker comes into the picture and almost takes a bite of Gregory’s head, but Maggie saves him.

Over at the Women’s Oceanside area, Tara surprises Natania by being in her house with a loaded gun, who tells her that they should have just killed her when they had the chance. A second woman, Cindy, enters the house. Tara tells the two women that her two friends are outside and will take over the place to get to their weapons to fight the Saviours. There is no time left, Tara and the two women hear explosions outside the house.

Now we see why Michonne was in a tree, when the people of Oceanside try to escape she helps the rest of the group on the ground to stop them.

Natania fakes a sore leg and manages to get the gun from Tara who tells her that the gun is empty, they are not there to hurt anyone.

Rick and the group have all the residents together when Natania shows up with a gun to Tara’s head and tells Rick to leave. In return, Rick tells her that if she doesn’t leave Tara go, they will kill her. Rick again tells Natania to put the gun down. Cindy pleads with Natania to put the gun down. All of a sudden there are walkers coming towards them, lots of them and gives time for Natania to get punched to the side of the face and everyone changes their focus on killing the walkers.

Natania is upset, she doesn’t care if everyone forged together to kill the walkers, she tells Rick that they are not fighting the Saviours with them, so just take the damn guns and go.

Back to Negan, he opens the door to Sasha’s cell, she took care of David the walker, and tells Negan that he won. Negan takes his knife and tells her that it takes a lot more for him to believe that she is going to surrender to him. He tells her that a little birdie told him that Rick is up to no good and he needs her help with that.

Gregory is in his office, pulls out his bottle of alcohol and takes a drink. He pulls out a map, then calls for Kyle, tells him that he is going to need him to drive him somewhere.

Eugene is at Sasha’s door, he tells her that word in the hall is that she is all in with things there. Sasha begs him to help her, she has to kill Negan or one way or the other he is going to kill their friends. She tells him that she has to die, it is the only way, he begs her to not let them use her, give her something, anything to kill herself. Eugene says that he will consider it.

Back at Oceanside, Rick and the group are taking all the guns. Tara tells Oceanside that they will return the guns when they are done.

Eugene is back at Sasha’s door, he tells her that he has decided to grant her request, he slides something under the door. It is a pill that will kill her and Sasha is devastated, she wanted a weapon.

Rick and the gang make it back to Rosita and the first thing they ask is where is Sasha. Rosita says that someone is there, she takes them inside and Dwight is there. Rick has to hold back Daryl from attacking him and Rosita says that Dwight wants to help.

Rick asks Dwight if it is true that he wants to help and when he says yes, Rick tells him to get down on his knees.