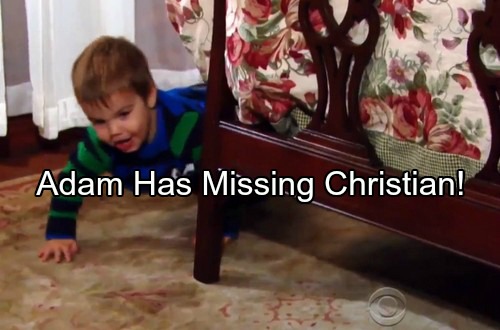 The Young and the Restless spoilers tease that Christian (Jude and Ozzy McGuigen) crawls away and is thought to be lost. The odds of that happening most places in the real world? Not that good. But baby this is daytime where anything goes, including a dead man returning to life and saving his son. Boom!

The sound word offered at the tail end of the last paragraph was a wink at fireworks, which are regularly heard and seen on New Year’s Eve across the globe. They reflect hopeful human emotions. 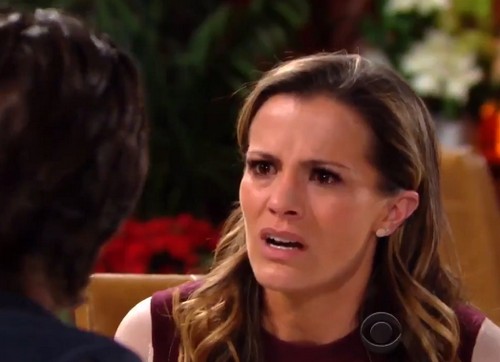 Happy, bright, cheery outlooks, why not? The calendar turns and a perceived re-freshening of life starts. And so too are Y&R fans hoping that buzz of what would be one of the great comebacks in daytime history happens. Let’s explore two soapy scenarios.

Viewers of a certain age recall when the photos of missing children were printed on milk boxes. Apparently that’s why Sharon (Sharon Case) will print and past Christian’s face on the side of her coffee cups?

Christian is seen, split from his dad and actual stepmom, Chelsea (Melissa Claire Egan). The little tyke’s first eight words are heard. Listen closely to the dialogue written for the twins who play this toddler. 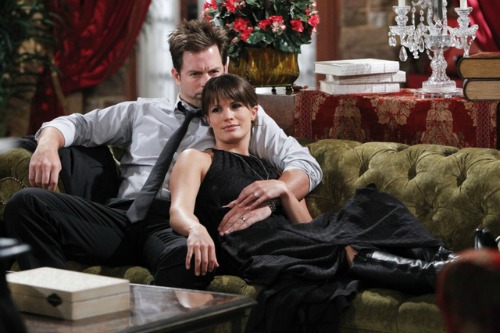 Maybe the identical McGuigen twins who are Christian threw a tantrum and forced their agent to lobby for Michael Muhney’s return? Child actors have been known to wield power in Hollywoodland.

Adam Newman (played as an adult in order by Chris Engen, Muhney and Justin Hartley) has been thought dead since 2016 returns alive in 2018! Why not? But a different scenario is obviously more likely to happen. And this also assumes an Adam recast. Christian crawls away. Nick and Chelsea are unable to find him, so the police are alerted.

A unseen stranger is seen holding the little boy. This person isn’t actually a kidnapper, but just someone who happened upon the boy in the club. He didn’t return Christian to his parents because he’s mentally unbalanced. That happens when one has survived a cabin explosion. 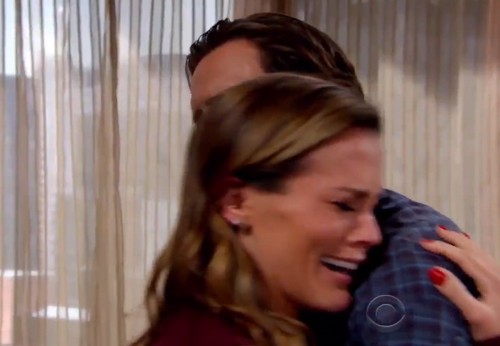 The audience believes it knows who is watching over the missing boy as the storyline flows forward. But the identity of the mystery man, who lives in the Shantytown section of this Wisconsin city, isn’t shown.

Eventually, this person puts Christian in a spot where he’ll be found. Y&R keeps the protector’s essence hidden. But then a voice over is heard just after the fabled face is finally shown. Yes, he’s been rehired (or hired) to play one of the great soapy characters in all of GC history.

Is it Engen, Muhney, Hartley in a limited-run event, or a new actor cast in this role? The answer to this final query can’t be given because readers must watch. CDL is a leading source for everything linked to The Young and the Restless. Check back regularly for Y&R spoilers and news!