BY Heather Hughes on July 21, 2017 | Comments: one comment
Related : Soap Opera, Spoiler, Television, The Young and the Restless 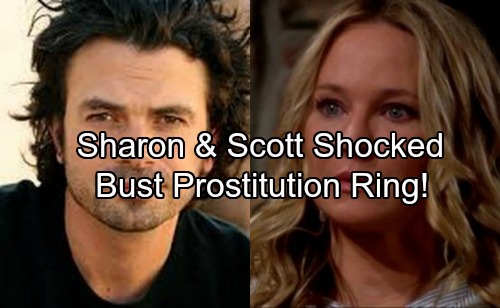 The Young and the Restless (Y&R) spoilers tease that a new face is headed to the CBS soap next week and she’ll be part of an exciting storyline. Morgan Obenreder will appear as Crystal, a distressed woman who needs Sharon’s (Sharon Case) assistance. Y&R fans will recall that Sharon has been helping out at a crisis hotline.

After everything she’s been through, Sharon really wants to make a difference in the lives of others. Crystal will stun Sharon when she calls about a sex trafficking ring. Perhaps she was a victim of it herself. Regardless, Crystal will have inside info and she’ll spill it to Sharon. She’ll hope that they can shut everything down and catch the criminals behind it.

It seems this is going to be a bit of an umbrella story. The Young and the Restless viewers know that Christine (Laralee Bell) asked Scott (Daniel Hall) to pitch in with a case involving a sex trafficking ring. He declined since he was trying to distance himself from undercover life. Scott was ready to settle down and enjoy being with Sharon, but he’ll looks like he may have to jump back into hero mode.

Sharon will undoubtedly give Scott updates on Crystal’s call. They’ll mull over how they can help her and put a stop to such an awful situation. There’s a good chance Zack (Ryan Ashton) and Tessa (Cait Fairbanks) will be involved in this Y&R plot. There has to be reason Sharon has been so suspicious.

Sharon has had some doubts about Tessa’s trustworthiness, but she may have been a victim like Crystal. That could certainly be one of her secrets. It appears The Young and the Restless is setting Zack up as the bad guy here. Since he’s been working with Abby (Melissa Ordway) on a new dating app, there could still be some shadiness afoot.

Zack claims he’s on the straight and narrow now, but is he really? The Young and the Restless spoilers hint that Abby could end up in danger down the road. Will Scott step up to save her? This could be the beginning of their inevitable romance. It sounds like some tense moments are on the way. We’ll keep you posted as other news comes in. Stay tuned to the CBS soap and don’t forget to check CDL often for the latest Young and the Restless spoilers, updates and news.