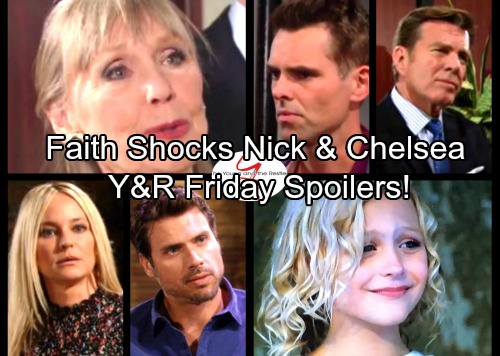 The Young and the Restless (Y&R) spoilers for Friday, August 25, tease that Faith (Alyvia Alyn Lind) will share her plans with Nick (Joshua Morrow) and Sharon (Sharon Case). She’ll explain that she’d like to spend most of her time at the ranch again. Faith will indicate that Victor (Eric Braeden) needs her right now. She’ll mention that Nikki (Melody Thomas Scott) moved out, so her grandpa’s all alone.

Once Nick hears that, he’ll immediately get suspicious. He’ll wonder how Faith knows about Nikki’s decision to leave. Faith will likely admit that Victor came to see her before she left camp. Y&R spoilers state that Nick will fume over his father’s latest strategy. Victor’s constant manipulation drives Nick crazy. Now that Victor is using Faith, Nick will be angrier than ever.

It looks like this war escalate, but Nick had better be careful. If he takes a stand against Victor, Faith could turn against her dad. Nick will do his best to keep the peace with Faith, but that’s going to be tough. The Young and the Restless spoilers say Victor will have a scheme in mind soon. He’ll hope Faith can do his dirty work.

Speaking of dirty work, Jack (Peter Bergman) may want to pass some of that on to Dina (Marla Adams). In Friday’s episode, Jack will suggest that his mother is suddenly an asset to Jabot. Perhaps Jack suspects that Dina will play a role in Billy’s (Jason Thompson) plot. Will he try to trick his brother? That plan certainly sounds right up Jack’s alley.

Jack could easily come up with a trap for Billy. However, Billy can be pretty sneaky as well. He’ll definitely think he has the upper hand on Friday. The Young and the Restless spoilers say Phyllis (Gina Tognoni) will want to know what her beau is up to. Billy will glance in Dina’s direction as he prepares to deliver a shocking blow.