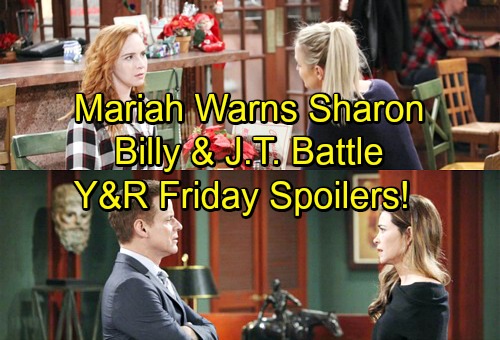 The Young and the Restless (Y&R) spoilers for Friday, December 15, tease that Billy’s (Jason Thompson) plan will fail. In Thursday’s episode, Billy suggests that he intends to avoid J.T. (Thad Luckinbell) while he’s in town. Naturally, that’s not going to work out. Billy will bump into J.T. on Friday and things will quickly get heated.

By the time this encounter’s over, J.T. will really be on Billy’s bad side. Meanwhile, Victoria (Amelia Heinle) will reel over Nikki’s (Melody Thomas Scott) revelation. Thursday’s confession will lead to questions on Friday. Victoria will obviously wonder what her mother was thinking.

Nikki stole money from Victor (Eric Braeden) and made some suspicious transfers. Now the funds are in offshore accounts and J.T.’s on the verge of uncovering who’s responsible. After Victoria scolds Nikki for her actions, she’ll decide she has to help her. Victoria won’t want Nikki to end up in prison. She’ll start mulling over ways to fix Nikki’s epic mistake.

It looks like Victoria may confide in Billy and seek some advice. She’ll be desperate to solve this problem, so she’ll do just about anything to make it happen. The Young and the Restless spoilers say Billy will make a startling suggestion. He’ll hint that maybe Victoria should seduce J.T. and hopefully get what she wants.

Victoria will likely shut down that idea, but she may keep the option in the back of her mind. It might be worth a shot! However, Y&R spoilers state that Victor may be the one to save the day. Next week, he’ll make a bold move for the sake of his family.

In the meantime, Mariah (Camryn Grimes) will mull over the Scott (Daniel Hall) and Abby (Melissa Ordway) situation. After getting the scoop from Faith (Alyvia Alyn Lind), Mariah will realize she needs to warn Sharon (Sharon Case). Will she share the news of Scott and Abby’s kiss or offer vague clues instead? Regardless, Mariah will indicate that Scott can’t be trusted.

Of course, Mariah doesn’t know the worst part. Scott and Abby did a lot more than just kiss! The Young and the Restless spoilers say their storage unit hookup will come to light sooner or later. We’ll give you updates as other Y&R details emerge. Stick with the ABC soap and don’t forget to check CDL often for the latest Young and the Restless spoilers, updates and news.