The Young and the Restless Spoilers: Graham’s Mother Related To Brent Davis – Ashley Has a New Family Member 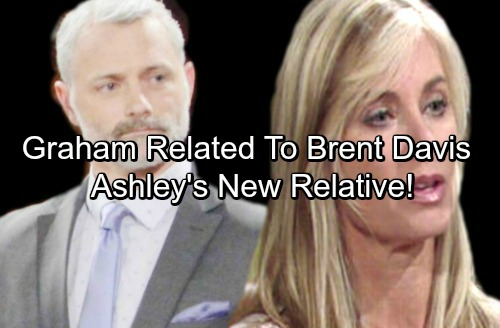 The Young and the Restless spoilers tease that the appearance of Graham’s (Max Shippee) mother could link to recent dialogue that invoked the decade’s old character Brent Davis (Bert Kramer). As Ashley (Eileen Davidson) has long relented, that deceased man was her biological father, meaning the beloved John Abbott (Jerry Douglas) was not.

Who is Graham and why has Dina (Marla Adams) apparently been taken in by a man who has now been confirmed as a liar? He’s said that both of his parents are dead and that Dina was the only person who feels like family to him.

A review of Mergeron’s personnel files revealed that Graham targeted the corporation as his intended employer. After multiple attempts failed, he charmed Dina at a public function and was summarily hired. He was promoted to and has been serving as her personal assistant for a year-plus.

Dina’s change of heart this summer, which made Graham the heir to the bulk of her estate, caused Ashley and Jack (Peter Bergman) to focus more intensely on this issue. Meanwhile, Madame Mergeron continues to fiercely defend the man she thinks of as her adopted son.

Ashley’s unauthorized entrance into Graham’s plush and fully gifted Genoa City Athletic Club suite yielded informational gold. She found a statement that showed he was paying $8,000 a month for a resident to live at a senior facility in Florida.

Thankfully, Ashley wrote down the information and was able to abscond with it. Graham caught her as she was attempting to exit his room, but didn’t realize what she’d gained. Ashley told him that Dina asked her to retrieve some paperwork. Graham later questioned his mark and learned that, while Ashley’s story wasn’t true, Dina had given her his key card and suggested her daughter should try to find whatever dirt she could.

Dina assured Graham that she didn’t believe he had anything to hide and was actually calling Ashley out. While Mr. Bloodworth appeared to accept Dina’s explanation, he was also incensed by Ashley’s invasion of his privacy.

After conferring with Ravi (Abhi Sinha), Ashley called the Florida facility and played the roll of a southern-speaking telemarketer. She spoke with a Mrs. Bloodworth, who acknowledged that her son pays all of her bills.

The soap world is often a small one, with many connections that appear to be incredible. These storyline etchings are intended to advance arcs.

In this instance, it would make sense to believe that Dina doesn’t know Graham is Brent Davis’ nephew. The Mrs. Bloodworth referenced looks to be in Dina’s age range and therefore could easily be Brent’s sister. Unless, of course she gave birth to his son, making Graham a brother to Ashley. How either potential option could factor into his scheme is yet to be known.