The Young and the Restless Spoilers: Hilary Wants To Be A Mom – Surprise Proposal Catches Devon Off Guard 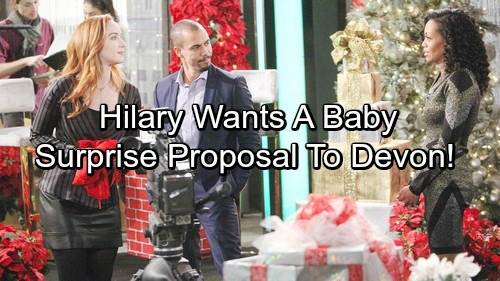 The Young and the Restless (Y&R) spoilers tease that Hilary (Mishael Morgan) will continue to spend time with Sam. Cane (Daniel Goddard) is developing a strong friendship with Hilary, so he’ll happily let her pitch in. Extra help never hurts when a new baby’s around and Cane must like having someone in his corner. It’s wise to stay on Hilary’s good side anyway. No one wants her as an enemy!

Hilary’s bond with Sam will strengthen and it could change her plans. She’s been focused on her career lately, but she may want to balance it out with a family. Hilary’s childhood letter to Santa seemed like a huge hint about that. It’s clear that Y&R is taking Hilary in a motherly direction.

Of course, there’ll be some obstacles for Hilary to overcome. If Hilary wants a baby, she’s going to need someone to father it. She’s not currently dating anyone, so what will she do about the daddy dilemma? Hilary may mull it over and pursue what she believes is the ideal solution.

The Young and the Restless spoilers state that Hilary will soon have a proposal to make. She’ll approach Devon (Bryton James) with an intriguing proposition in 2018. Devon will certainly be taken aback by whatever Hilary pitches. He may think her idea’s pretty crazy, but he’ll at least hear her out.

Hilary hasn’t been chasing after Devon, so she may think their ship has sailed romantically. As a result, she may have more of an arrangement in mind. Could Hilary ask Devon to help her become a mom? Will she ask Devon to be her sperm donor? It doesn’t seem that far-fetched for someone like Hilary. She’s willing to put herself out there and ask the daring questions.

Hilary might suggest that Devon doesn’t have to be involved in the child’s upbringing if he’s not interested. Securing his good genes would be enough for her. However, Hilary could also offer the chance to co-parent. She might think that’d be an equally acceptable agreement.

Naturally, this could lead to Devon and Hilary’s reunion. The Young and the Restless fans can tell that it’s brewing. Devon might mull everything over and insist that this isn’t what he wants. He’d much rather have a real future with Hilary and make their babies the old-fashioned way. Devon might propose the alternative of getting back together and officially starting their family.

It sounds like some exciting developments are coming up. We’ll give you updates as other Y&R news emerges. Stick with the CBS soap and don’t forget to check CDL often for the latest Young and the Restless spoilers, updates and news.