The Young and the Restless Spoilers: Huge Changes In Abby’s Life Now That Zack Is Dead – Love, Baby and Marriage 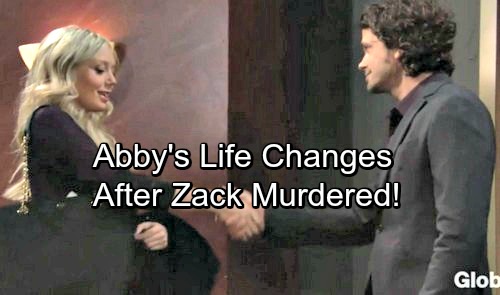 The Young and the Restless spoilers tease that Zack’s (Ryan Ashton) murder at Crystal’s (Morgan Obenreder) hands does more than save the lives of Abby (Melissa Ordway) and Scott (Daniel Hall). It also gives Ordway’s character a better chance to live a stronger life.

In this scribe’s opinion, Abby was written somewhat off-course during Sally Sussman’s tenure as co-executive producer and head writer. It’s not that Abby was the only person in Genoa City to be taken in by Zack, as many others were fooled as well. But the regression seen in this longtime character was noticeable. However, executive producer and now-head writer Mal Young has a chance to reverse course and write Abby back to believability.

As Y&R fans have seen, Abby performed well at Newman Enterprises. Yes, there was the Design Date mistake, but she’s done all that Victor (Eric Braeden) asked and more. Most importantly, she was loyal.

There’s no telling what role, if any, Abby will have in the family business now that Vlad the Impaler Vickie (Amelia Heinle) has been installed as Victor’s version of Mini Me. Abby already knows that she won’t be enjoying a key role within the revamped power structure. In a true personality swap, insecure Vickie is targeting accomplished Abby.

However, the expectantly hard business conditions that Abby will be asked to work under could provoke her to move on. Instead of returning to Jabot, Abby should start her own business. Writing this character in such a direction would be a bold move for sure.

On a personal level, it does seem that she and Scott are destined to be together. He’s surely not anything like Zack, who apparently was going to kill Abby, Scott, or both. A foreshadowing of the Scabby pairing was seen in the storage unit. Putting spontaneous romance issues aside, Abby stepped up and helped Scott deal with the lingering visions that continue to haunt his mind.

Now, imagine a layered storyline where Abby is free from Newman Enterprises and is the lead partner in a relationship with her next significant other. No longer the Naked Heiress, or the unappreciated corporate underling, Ordway’s character takes charge of her own personal and business lives.

Later, she also has her first child. That storyline has also been established with either Zack or Scott as the father, despite Abby’s comments about having taken precautions.

Savvy soap fans know that Ordway is pregnant in real life. Her expected due date is less than two months away. So a temporary write-out will be necessary sometime in February. Hopefully by that time, or shortly thereafter, Abby will have been advanced to a position of strength on all deserved levels.

Spend Thanksgiving with your #YR family and gobble up the drama! Tune in this week on the Young and the Restless. pic.twitter.com/Opgf6UHNZD