The Young and the Restless Spoilers: Jack’s Plan Sinks Brash and Sassy – Perfect Revenge On Billy The Thief 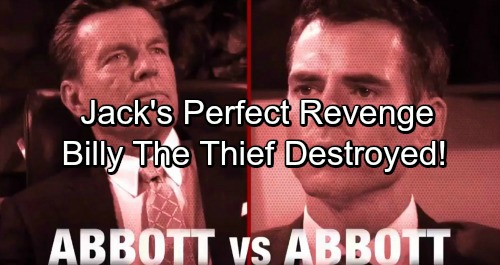 The Young and the Restless spoilers tease that Jack’s (Peter Bergman) plan to outwit his little brother will work. Rather than respond legally to what Billy (Jason Thompson) did, in stealing Jabot’s corporate business plans, the CEO made a savvy decision. He told Ravi (Abhi Sinha) to keep the digital portal accessible.

Choosing to feed Brash and Sassy false information is an understood short-term response. Eventually Vickie (Amelia Heinle) and Billy will determine they were caught and had, but that could take awhile to happen. Until then Jabot will send Brash and Sassy on goose chases.

Ashley’s (Eileen Davidson) usually astute instincts have been way off and were again in this instance. Her gut reaction to Jack’s retaliation plan was a complete rejection, followed by another verbal lambasting about his character.

Comparing Jack’s response to Billy’s behavior missed the point and didn’t serve Jabot’s best interests. Even though Ashley refuses to realize it, Jack is protecting the business that their father built. Well, John (Jerry Douglas) was actually only Jack’s biological father, which leads into our next point about Ashley.

Dina’s (Marla Adams) arrival in Genoa City can be marked as the moment when Ashley’s perspective was skewed. That’s understandable, considering the sordid Brent Davis (Bert Kramer) issue that permanently damaged her life when Dina revealed it in the 1980’s. Knowing that, Jack is right to take whatever his sister has to say with a grain of sea salt.

A telling spot in the storyline came when Jack opted not to place blame on either Dina, or Phyllis (Gina Tognoni) for the security breach. As Ravi discovered, Dina’s username and password were used to access Jabot’s server and Phyllis’ corporate laptop was determined to be the source point from which the discovered espionage occurred.

Jack knew that Dina wasn’t the culprit and that Phyllis also wasn’t guilty. Considering the verbal battled he just had with his mother about Nikki (Melody Thomas Scott) and the sleuthed photos that were just sent to Victor (Eric Braeden), along with his lingering antipathy toward his ex-wife, Jack’s ability to see through to Billy’s act of aggression was impressive.

Billy has recently been reverting to his former slippery form. So he’s sure to continue using Phyllis’ laptop without her permission. The next time he does he’ll gain faux information about Jabot’s intended road forward.

Brash and Sassy’s top brass, meaning Vickie and Billy, will use the stolen goods to set their business course. Smilin’ Jack will be laughing as they do. CDL is a leading source for everything linked to The Young and the Restless. Check back regularly for Y&R spoilers and news!