The Young and the Restless Spoilers: Jess Walton Returns to Y&R – Jill Chews Out Billy and Cane, Forces Step-Brothers Together 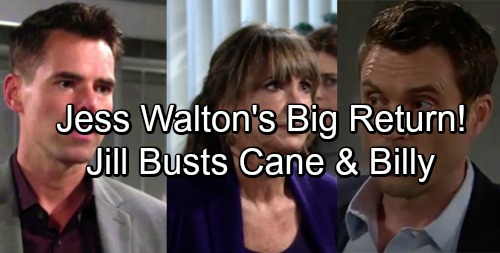 The Young and the Restless spoilers tease that Jill’s (Jess Walton) return to Genoa City will result in both of her boys being chided. Billy’s (Jason Thompson) outrageous espionage acts, Cane’s dissolved marriage and his second family will apply pressure to Jill’s sensitive ticker.

As Y&R fans recall, Jill’s had a heart attack earlier this year. Walton’s terrific talent was evident during that arc as the vulnerable side of Jill was displayed. But her son through John (Jerry Douglas) and her stepson through Colin (Tristan Rogers) hardly considered Jill’s health as they jeopardized their lives while she was away. 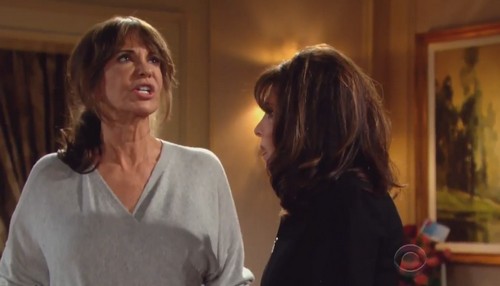 Walton is Y&R’s main link to Jeanne Cooper (Katherine Chancellor). So hardcore fans know they’re in for a treat any time Jill returns.

Billy recently made a very foolish choice. As Jill will remind him, he attacked the company his father founded when he stole Dina’s (Marla Adams) password and used Phyllis’ (Gina Tognoni) laptop to access Jabot’s server and download sensitive business plans. Then, despite Vickie’s (Amelia Heinle) request, he repeated the scenario recently.

Jill took Brash and Sassy from Billy because she believed he didn’t have the responsibility to run it. She was okay with later selling the one-time Newman Enterprises division to Vickie, who Jill still hopes will eventually reconcile with Billy. But her son’s actions now put the business in danger of going under and of him being arrested because Jack (Peter Bergman) no longer has love for his brother. 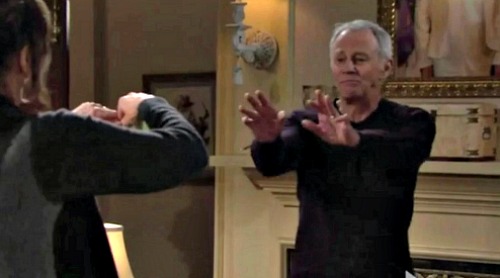 Cane’s issues are different then his stepbrother’s. Mr. Ashby’s connection, if one can call it that, with Juliet (Laur Allen) cost him his job, helped to end his marriage to Lily (Christel Khalil) and will soon result in the birth of another son. That’s a lot for Jill to chew about.

Like Colin, Jill will size up Juliet. Unlike her husband, who will likely be charmed by Miss Helton’s pretty face and current condition, Jill will put the soon-to-be mother of her step-grandson on notice.

Jill won’t fully label Juliet as a homewrecker, knowing that the DARE commercial shoot bribery scheme actually did Cane in. But she will let this young woman know, in no uncertain terms, exactly what she’ll expect of her moving forward.

Cane will get an earful about how he blew it with Lily and how he created major damage for the twins. However, since Cane is in need of employment she may give him a job at Chancellor. Billy may soon be out of work as well. If he’s not in jail, Jill could force him to team with his stepbrother again. But this time that would be at Katherine’s company.