The Young and the Restless Spoilers: Jordan and Chelsea Cuddle Up – Mariah and Hilary’s Bloody Brawl – Ashley Blows Up

BY Heather Hughes on May 5, 2017 | Comments: 17 comments
Related : Soap Opera, Spoiler, Television, The Young and the Restless 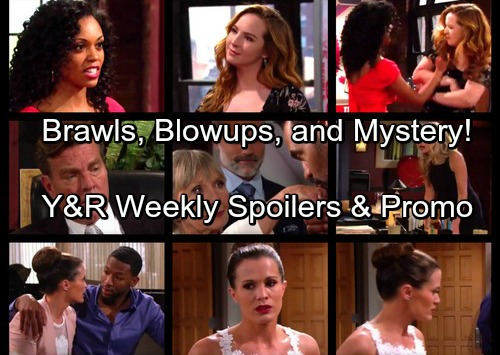 The Young and the Restless (Y&R) spoilers for the week of May 8-12 tease that the conflict is about to explode. For starters, Hilary (Mishael Morgan) will decide she’s had enough of Mariah (Camryn Grimes) and her gloating. The trouble will begin after Mariah’s passionate night with Devon (Bryton James).

Once they wrap up their love-making, Devon will urge Mariah to wear one of the dresses Hilary left behind. He’ll point out that several of them were never worn. After Mariah dons one and heads to the TV studio, Hilary will hit the roof. She’ll be even angrier when Mariah gushes about how Devon blew her mind.

The Young and the Restless spoilers state that their fight will continue on the air. Hilary will mention that a billionaire is taking advantage of a sad girl. She’ll insist he’s just desperate to get over his fabulous ex. Mariah will contend that Devon is the one who suggested she should wear Hilary’s clothes.

Their feud will escalate and the results will be epic. Y&R spoilers reveal that Hilary will rip Mariah’s dress off her. Poor Mariah will be standing there in her slip as the cameras keep rolling. This isn’t the first time Hilary has embarrassed Mariah on their scandalous show.

Mariah will decide that if she’s going down, Hilary is going down with her. She’ll scratch and claw right back. They’ll both scream as this brawl goes wild! The Young and the Restless fans definitely won’t want to miss this intense faceoff.

Meanwhile, Ashley (Eileen Davidson) will be appalled when Jack (Peter Bergman) softens toward Dina (Marla Adams) slightly. He’ll confess that he wouldn’t disconnect if their mom called him up. Jack seems open to the idea of making amends, but Ashley most certainly is not.

This week’s The Young and the Restless promo shows Ashley asking, “You actually want to have a relationship with the woman that abandoned us? Are you trying to drive me insane?” Ash will snap that Dina is vile, vicious and cold. She won’t think Dina ever deserves a pass for the pain she’s brought to their family. Will Ashley change her mind down the road or will things only get worse from here? Will Dina reach out and hurl the Abbotts into chaos?

Perhaps more exciting to some Y&R fans than all the action above is provided by the further visual clues that Chelsea (Melissa Egan) and Jordan (Darnell Kirkwood) might share a steamy past. Once scene shows a scowling Nick (Joshua Morrow) leaving a crushed Chelsea as he closes the apartment door.

What history could Jordan and Chelsea share that they must hide from their nearest and dearest? Looks like we’ll get to see some of this mysterious past exposed on this new Y&R episodes this week, May 8 to May 12. We’ll give you updates as other news comes in. Stay tuned to Y&R and don’t forget to check CDL often for the latest Young and the Restless spoilers, updates and news.