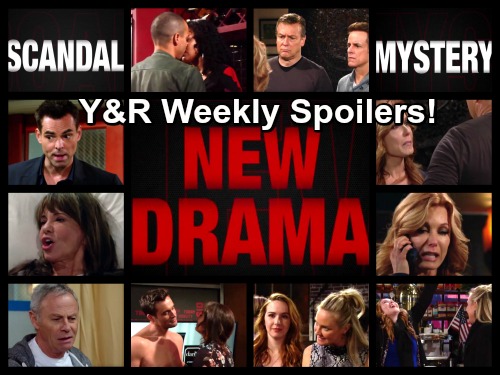 The Young and the Restless (Y&R) spoilers for the week of February 20 to February 24 tease that we’ll see a nice blend of action, drama and romance. For starters, Colin (Tristan Rogers) will continue to pay for his mistakes. Jill (Jess Walton) was furious when she learned Colin emptied out her personal bank accounts. Their confrontation led to Jill’s heart attack, which obviously didn’t help the situation.

Billy (Jason Thompson) will do everything he can to keep Colin away from Jill’s room and the Chancellor mansion. He already kicked Colin out of the hospital and he’ll soon change the locks at home. It’s clear that Billy is just as fed up as Jill. He’s determined to reduce the stress in Jill’s life and that means cutting Colin out entirely.

Of course, we all know Colin won’t sit back and let his relationship slip away. He’ll fight for Jill, but she’ll resist his efforts to repair the damage. Y&R’s weekly preview shows Jill shouting, “WE…ARE…THROUGH!” Billy will agree that Colin needs to back off. He’ll hope to protect his mom from her main source of tension.

While Colin tries to figure out his next move, Devon (Bryton James) will face a tough battle. Hilary will certainly be a thorn in Devon’s side. He’ll struggle to deal with his mixed feelings about her. Devon is still angry with Hilary, but he’s also extremely attracted to her. Temptation will be a huge issue for Devon this week.

The Young and the Restless promo shows Devon leaning toward Hilary like he’s going to kiss her. Will he cave in or pull away at the last second? Could this even be a fantasy? Regardless, Devon is sure to beat himself up over this. He believes reconciling with Hilary would only bring more heartache.

Elsewhere, Cane (Daniel Goddard) will go shirtless so Lily (Christel Khalil) can test out some body spray. They’ll enjoy some flirting, but the fun may not last. Not to be outdone, Jordan (Darnell Kirkwood) will strip down for spritzing as well. Will his hot bod catch Lily’s eye? Y&R fans will want to stay tuned!

Other Young and the Restless spoilers say Lauren (Tracey E. Bregman) will discover that her son, Scotty (Daniel Hall), has vanished from a war zone. Once Paul (Doug Davidson) delivers the news, Lauren will immediately panic. Scott will manage to get in touch with Lauren for a moment, but a disconnection will quickly follow.

Lauren will worry that Scott may be in danger. This storyline should come with some surprising twists and turns. We’ll give you updates as other details emerge. Stick with Y&R and don’t forget to check CDL often for the latest Young and the Restless spoilers, updates and news. Come and join in the LIVE discussion on our Facebook Page!