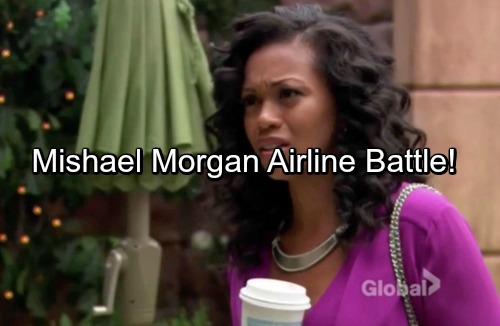 The Young and the Restless (Y&R) spoilers tell us that actress Mishael Morgan (Hilary Curtis) posted to social media about a horrible customer service experience she had on a recent flight to Toronto, Canada. Morgan flew on an Air Canada flight and never expected to be harassed by the flight attendant for trying to put her toddler to sleep.

The Y&R star was traveling with her son, Niam and claims a flight attendant verbally attacked her for no reason. Morgan was seated in the back of the plane, trying to rock her tired toddler to sleep. The Young and the Restless star said the “no seatbelt” sign was on, which meant she was free to get out of her chair.

A flight attendant approached Morgan and aggressively told her to sit down. The attendant’s supervisor watched the whole incident. Mishael voiced a verbal complaint to the supervisor and demanded an apology from the rude flight attendant. The Y&R actress said the attendant grew more hostile during her chat with her supervisor. Morgan stated that it felt like the attendant went out of her way to ruin her flight. 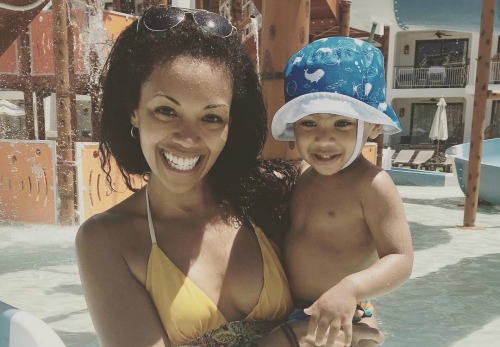 The Young and the Restless actress posted about her experience to her Instagram account to warn her followers about Air Canada’s horrible customer service. In the letter Air Canada sent her, they said her concerns would be addressed. They did not provide her with a message from the flight attendant who verbally attacked her.

Morgan ended her Instagram post by saying the discount was nice, but they didn’t give her what she wanted. She added that she felt like they were brushing her concerns under the rug. Mishael Morgan felt that Air Canada flight staff’s behavior was rude and unprofessional —there’s no question about that.

She wanted her followers and fans to know about her experience and hoped it would prevent this happening to anyone else. Are you surprised by Mishael Morgan’s flight experience? Stick with CDL for more The Young and the Restless spoilers, news, and casting updates! Sign up for our newsletter by clicking here and get the latest breaking soap news!

I waited a month to post this because I wanted to give @aircanada a chance to respond. While on a flight, my son I was harassed by an aggressive flight attendant. I was trying to rock my child to sleep at the back of the plane, and this attendant kept going out of her way to verbally attack us even thou I was desperately try to ignore her and there was no seat belt sign on. After speaking with the supervisor on the flight, this flight attendant lost it and got in our faces. She began verbally accosting us on the flight, right in front of her supposed supervisor! I'm standing there with my child strapped to my chest, in utter disbelief. The supervisor did nothing! It was the most unprofessional thing I have ever experienced! All I really wanted was a written apology from this employee. I want to know that she didn't get away with this rude, and unprofessional behaviour. I didn't think it was too much to ask, but apparently it was. Thanks for the apology and the 15% off, but my dignity is worth a bit more @aircanada #ihateaircanada #travelnightmares #airlineboycott #whyaremytaxespayingforthis #laststraw #protectivemama