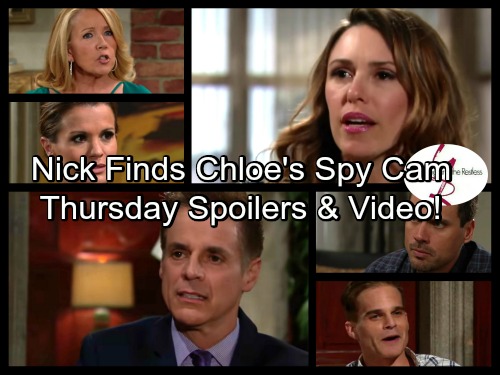 The Young and the Restless spoilers for the new Y&R episode on Thursday, March 23, tease that Nick (Joshua Morrow) will mull over Chloe’s (Elizabeth Hendrickson) strange comment. She noted that her life changed for the better six months ago. Nick will wonder if the explosion was really an accident.

When Nikki (Melody Thomas Scott) gets some hints from her son, she’ll ask who would’ve tried to murder Adam (Justin Hartley). Naturally, Nick’s mind will go straight to Chloe. At Crimson Lights, Chelsea (Melissa Claire Egan) will talk to Sharon (Sharon Case) about the inheritance check. She’ll confess that it brought back a lot of difficult memories. 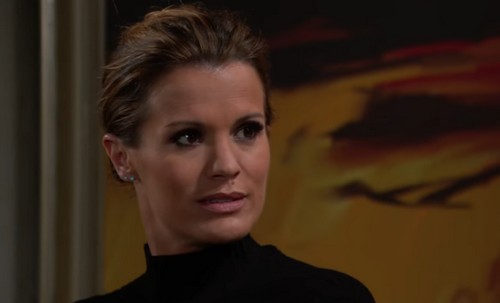 The Young and the Restless spoilers says that Chelsea will mention that Adam has been dead for six months. That crucial number keeps popping up. After Chelsea goes home, Sharon will get some help with her college essay. Scott (Daniel Hall) will share some sweet moments with Sharon as he offers tips.

At the penthouse, Chloe will freak when she finds out about the money from Nick. She’ll insist that Chelsea needs to give it back. Chloe has a big problem with anything that’s connected to Adam. As Chloe gets increasingly upset, Chelsea will seem suspicious. They’ll discuss Adam’s demise and Chloe will allude to the cabin’s view of the lake. 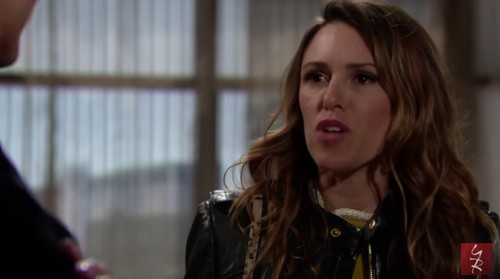 Chelsea will ask how Chloe knew what the cabin overlooked. Chloe will fib that Chelsea must’ve talked about it at some point. When Nick shows up, Chloe will tell him that Chelsea needs to forget Adam. The Young and the Restless spoilers say Nick will object to that idea.

Later, Nick will notice something unusual about Connor’s (Gunner and Ryder Gadbois) stuffed dinosaur. Young and Restless spoilers tease that Nick will pick it up and pull out the device that was planted inside. Chelsea and Nick will be taken aback by this discovery. 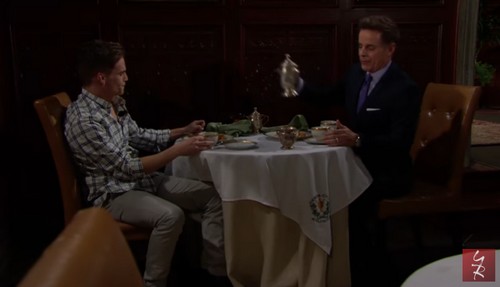 At the athletic club, Kevin (Greg Rikaart) will try to convince Michael (Christian LeBlanc) that it’s time to propose to Chloe. Michael won’t think it’s the best plan, but Kevin will maintain that Chloe has changed. After a tense debate, Michael will assure Kevin that he’s OK with it.

Other Y&R spoilers state that Jack (Peter Bergman) will rip into Gloria (Judith Chapman) for causing problems with her fake scandal. She’ll head over to Brash and Sassy for a confrontation with Victoria (Amelia Heinle). Meanwhile, Billy (Jason Thompson) will stop by Jack’s office in hopes of stopping the ongoing battle. 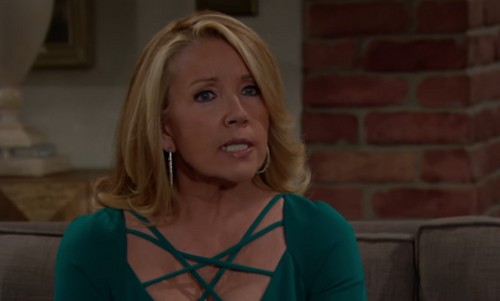 Jack will contend that he won’t have to continue the war. He’ll argue that Billy will find a way to sabotage himself. Billy will return to Brash and Sassy to thank Victoria again. He’ll kiss her before he heads off to Toronto for a meeting.

The Young and the Restless spoilers say Jack will end up at Top of the Tower. Once Nikki catches him sulking and drinking, she’ll suggest that Jack needs to get it together. All of this resentment is sending him on a downward spiral.

It sounds like more trouble could be brewing for Jack and definitely for Chloe! We’ll give you updates as other news comes in. Stay tuned to Y&R and don’t forget to check CDL often for the latest Young and the Restless spoilers, updates and news. Please come and join in the LIVE discussion on our Facebook Page!