BY Heather Hughes on October 26, 2017 | Comments: one comment
Related : Soap Opera, Spoiler, Television, The Young and the Restless 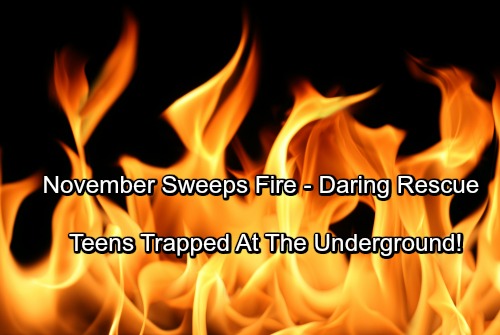 The Young and the Restless (Y&R) spoilers reveal that November sweeps will kick off with a shocker that’s truly hot! If you check out CDL’s comings and goings news, you already know Tom (Casey James Phillips) the firefighter will appear on November 3. We now have some storyline details about the blaze he’ll battle.

An evening at The Underground will go horribly wrong for Y&R’s teen scene. The Young and the Restless spoilers state that a fire will spark total panic. Charlie (Noah Alexander Gerry), Mattie (Lexie Stevenson) and Reed (Tristan Lake Leabu) will all be trapped by the flames. As smoke fills the building, they’ll fear for their lives.

This fire will force three male characters to put aside their differences and work together. Nick (Joshua Morrow), Cane (Daniel Goddard) and Billy (Jason Thompson) will do their best to save the day. The Young and the Restless spoilers say they’ll exhibit true bravery in a time of crisis. They’ll vow to rescue Reed, Mattie and Charlie or die trying!

This could be a crucial opportunity for Cane. Saving Charlie and Mattie would obviously earn him some serious points with Lily (Christel Khalil). If Cane has to be hospitalized thanks to his heroic efforts, that’s even better. Anything that will make Lily sympathetic is a good thing.

One rescue mission won’t redeem Cane completely, but it’s a step in the direction. As for Billy, he’ll earn Victoria’s (Amelia Heinle) deep gratitude. Their bond should grow stronger since Reed will likely owe Billy his life. Phyllis (Gina Tognoni) has been pushing Billy away, so this could make the “Philly” situation even worse.

Nick’s involvement matters for a couple reasons. First, Y&R teased the idea of a Nick and Lily pairing recently. If Cane can’t get to both of the twins, perhaps Nick will grab one of them. The Young and the Restless may or may not be ready to reunite Lily and Cane. If they choose to hold off, they could use this ordeal to pull Lily even further into Nick’s orbit.

The source of the fire is also important. Since it looks like Nick may start it accidentally, he’ll need to get in there and fix his mess! Plenty of excitement is coming next week. We’ll give you updates as other Y&R info emerges. Stick with the CBS soap and don’t forget to check CDL often for the latest Young and the Restless spoilers, updates and news.