The Young and the Restless Spoilers: Sharon and Nick Recall Fond Memories – Lauren Fears For Scott – Reed Steals the Show 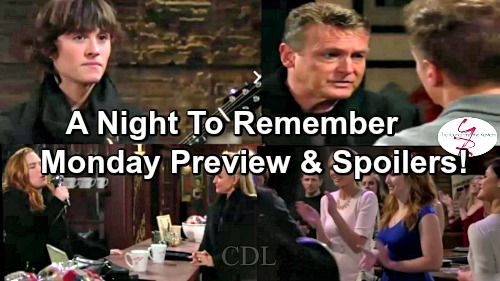 The Young and the Restless (Y&R) spoilers for Monday, February 20, tease that Lauren (Tracey E. Bregman) will worry when she doesn’t hear from her son. Scott (Daniel Hall) works for a news agency and is on assignment in a war zone. Michael (Christian LeBlanc) will offer reassurance, but Lauren will still fret about Scott’s safety.

Suddenly, Paul (Doug Davidson) will show up with disturbing info. He’ll state that Scott may be missing since he didn’t turn in his story and no one has been able to reach him. Lauren will shout that she’s going to look for him herself, but Michael will talk her out of going to the Middle East.

Paul will suggest that Scott could be a hostage somewhere. When Lauren’s phone rings, Scott will be on the other end. He’ll only get out a word or two before the call disconnects. At the hospital, Billy (Jason Thompson) will thank Victoria (Amelia Heinle) for coming to check on Jill (Jess Walton). He’ll give her updates and they’ll talk about relieving some of Jill’s stress.

Victoria will return home for a mild confrontation with Reed (Tristan Lake Leabu). Later, Billy will stop by to tuck in the little ones. He’ll tell Reed about Jill’s heart attack and the scary situation they’ve been dealing with. While Billy is upstairs, Victoria will talk to Reed about making the most of life.

Reed will decide he needs to steal all the joy he can. He’ll sneak out to attend open mic night at The Underground. Meanwhile, Billy and Victoria will exchange apologies. He’ll suggest that she’s a good parent and she’ll echo the idea. Victoria will think Billy is a great father as well, but she’ll joke that his husband skills are lacking.

Other Y&R spoilers say Mariah (Camryn Grimes) will convince Sharon (Sharon Case) to go with her to open mic night. They’ll head over for some drinks and music. At The Underground, Abby (Melissa Ordway) will make Chelsea (Melissa Claire Egan) nervous by talking about her relationship with Nick (Joshua Morrow). Chelsea won’t seem sure she’s ready to being a full-fledged couple.

Once Sharon arrives, things will get even more awkward. Nevertheless, Sharon will try to prove that Chelsea and Nick’s connection doesn’t bother her. She’ll chat with them and Sharon’s ownership of Crimson Lights will come up. Nick and Sharon will recall fond memories of running it together. He’ll think it’s nice that she’s in charge again.

The Young and the Restless spoilers reveal that Reed will show up to perform at this fun event. Noah (Robert Adamson) will offer an introduction and Reed will wow the crowd. Mariah will make a video of Reed playing his new song. There’s a good chance that will be important later.

Reed may get in trouble for sneaking out, but he just might become a viral sensation. We’ll keep you posted as other Young and the Restless details emerge. Stay tuned to Y&R and don’t forget to check CDL often for the latest Young and the Restless spoilers, updates and news. Come and join in the LIVE discussion on our Facebook Page!