The Young and the Restless Spoilers: The Abbott Family’s Future Revealed After Dina’s Storyline Climax

BY Sean O'Brien on October 22, 2017 | Comments: one comment
Related : Soap Opera, Spoiler, Television, The Young and the Restless 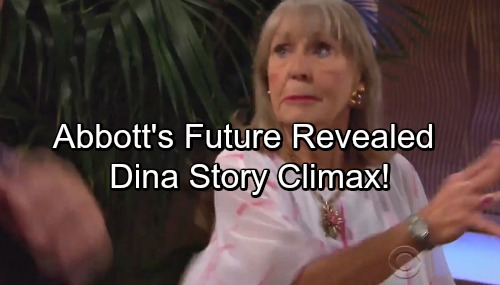 The Young and the Restless spoilers tease that storyline involving Dina (Marla Adams) will end. The arc involving the return of the controversial former Abbott family member played out well. Now, as with all things soap, it’s time to move forward.

Ashley’s (Eileen Davidson) ages-old backstory was mined in order to help reintroduce Adams’ character. Never a top Genoa City personality in her day, the return of Dina allowed a solid actor to help represent a neglected age segment on the soaps.

Yes, seniors are wiser than the middle-age and younger crowds that are often the focus. Sorry, younger people who sport one main skill set, being technically savvy, don’t rule the world. They’ve simply inherited it from past generations, are far from perfect and are intentionally sensitive. Billy (Jason Thompson) exhibits those flaws in his generation’s armor.

With mother issues behind her, Ashley should begin to focus on more than business. A sweet storyline previously emerged that matched her with Ravi (Abhi Sinha). An organic couple that grew from friendship into something more could lead to marriage, hopefully.

Jack (Peter Bergman) fixates on everything. So, he’s naturally been all over Graham’s (Max Shippee) relationship, if one can call it that, with Dina. At the same time, Jackie-boy has been passively-aggressively fighting Billy.

When Dina’s crisis ends, it would be smart for Jack to then focus on what really matters. His passion, which has helped some family members, must be directed inward. It’s time for Jack to fix Jack.

Whether he reconnects with Phyllis (Gina Tognoni) could become a question, if ‘Philly’ fumbles as is expected. Maybe it’s time to make a fresh start with another woman? He should also power-share at Jabot with Ashley, who’s eminently qualified.

Traci (Beth Maitland) is a good soul, but sadly has also been a recurring character for years. So, viewers assume she’ll return to writing in New York. Hope all goes well until Christmas, when she should be back in GC again.

And then there’s Billy. Jess Walton (Jill) is scheduled to return to Y&R soon, which is good. This son is again in need of his mother’s guidance.

Victor’s (Eric Braeden) involvement may eventually edge Billy out of Brash and Sassy. But if the younger Abbott brother is smart, he’ll reunite and then remarry Vickie. They are each other’s soul mates and have children together. He needs to make this reunion happen and then make it last.