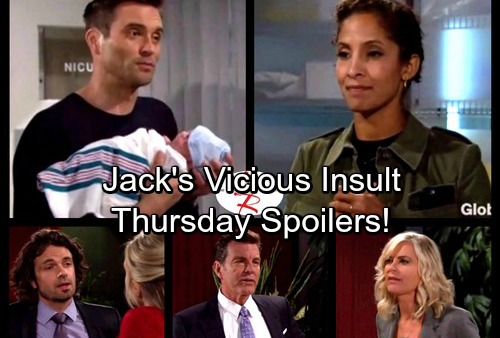 The Young and the Restless (Y&R) spoilers for Thursday, December 7, tease that Cane (Daniel Goddard) will spend some time bonding with his son. Sam’s growing stronger after his recent surgery. Cane will be one proud papa when Lily (Christel Khalil) walks in. He’ll give her updates on Sam’s health and wonder if she’d like to hold him.

Lily will hesitate, but she’ll eventually decide to cradle the baby in her arms. As Lily stands there with Sam, she’ll be hit with some overwhelming emotions. Part of Lily could see herself getting attached to this child. She could imagine loving Sam and caring for him as if he were her own kid.

Unfortunately, Lily isn’t ready to reunite with Cane and she’s not sure she ever will be. Since everything’s so uncertain, Lily won’t want Cane to get the wrong idea. It’s not fair to Cane or even Sam. The Young and the Restless spoilers say Lily will hand the baby back and rush out of the room. Let’s hope she can get a grip and figure out what she truly wants.

Meanwhile, Abby (Melissa Ordway) will also have a lot on her mind. She’ll push Scott (Daniel Hall) to be honest with her in Thursday’s Y&R episode. Abby will ask how Scott really feels about her. She might point out that they seem to have a love-hate thing going on. One minute they’re bickering and the next they’re on the verge of a kiss.

Abby will want some clarity on Scott’s side of all this. He may admit that there’s a spark between them. Scott might even confess that he has real feelings for Abby. However, he’s committed to Sharon (Sharon Case) and has no intention of breaking up with her. In fact, they’re going to be living together.

Of course, Scott’s commitment can’t stop temptation or prevent his secret from coming out. He’ll undoubtedly run into trouble soon. Elsewhere, Ashley (Eileen Davidson) and Jack (Peter Bergman) will get into a vicious argument. When Jack makes a move Ashley disagrees with, she’ll suggest that their father would be appalled.

That’s when Jack will deliver a harsh blow. He’ll correct Ashley and contend that John (Jerry Douglas) was his father, not hers. If Jack wants Ashley to back off, this isn’t the way to make it happen. Jack’s cruelty will only make Ashley more determined to stay in control at Jabot.