BY Kinsley Goldman on December 6, 2017 | Comments: one comment
Related : Soap Opera, Spoiler, Television, The Young and the Restless 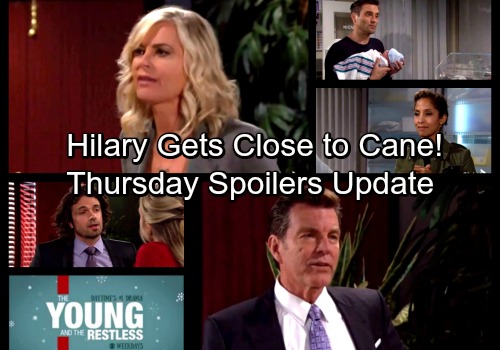 The Young and the Restless (Y&R) spoilers for Thursday, December 7, tease that Lily (Christel Khalil) will face some awkwardness at the hospital. When Cane (Daniel Goddard) asks if Lily wants to hold the baby, she’ll seem uncertain about it. Once Sam’s in her arms, Lily will get rattled and hand him back. She’ll take off, but Hilary (Mishael Morgan) will show up to give Cane some support.

Cane will suggest that Hilary’s a natural when she cradles Sam. He’ll hate that his relationship with Lily is still strained, but Hilary won’t think he should give up. Unfortunately, Hilary will also encounter a big problem on Thursday. Jack (Peter Bergman) will agree to sponsor the show in exchange for plenty of product promotion. However, Ashley (Eileen Davidson) definitely won’t be on board.

Hilary will be outraged when Ash refuses to sign the paperwork. It’ll lead to a huge fight between Ashley and Jack a little later. The Young and the Restless spoilers say Ashley will call a family meeting to settle all of this. She’ll seek full control of the company, but Jack will barge in and declare that the meeting’s over.

Billy (Jason Thompson), Traci (Beth Maitland) and Abby (Melissa Ordway) will all have to handle the tension. They’ll feel like Jack and Ashley expect them to choose sides. Afterward, Phyllis (Gina Tognoni) and Billy will vow to leave the drama at the office. They’ll assure each other that their reunion is going to stick.

Back with Jack and Ashley, Y&R spoilers say their argument will get pretty vicious. Ashley will point out that their father wouldn’t approve of Jack’s behavior, but he’ll just throw her paternity in her face. After Dina wanders off briefly, Ashley will contend that Jack can’t seem to take care of their mother either. Jack will snap that Ashley can deal with Dina tomorrow and see how things go for her.

At Newman, Abby will try to figure out what’s in Scott’s (Daniel Hall) heart. She’ll mention the fact that they nearly kissed yesterday. Scott will eventually make a confession. He’ll note that he’s been longing for another round of sex, but it doesn’t matter. Scott will vow to stand by Sharon (Sharon Case), so Abby will leave in a funk. She’ll meet up with Lily to discuss how complicated men can be.