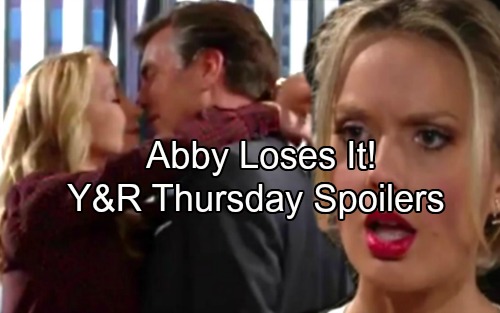 The Young and the Restless (Y&R) spoilers for Thursday, July 20, tease that Nikki (Melody Thomas Scott) and Nick (Joshua Morrow) will clash over the concert again. Nick will argue that he was just protecting his mom and their family. Nikki will think that sounds awfully familiar. She’ll argue that Nick is just using the same excuses as Victor.

Nick and Nikki will eventually decide to put the conflict to rest. They’ll patch things up and agree that they don’t like to fight. Later, Noah (Robert Adamson) will briefly get caught in the middle of Nick and Victor’s feud. He’ll try to ease the tension, but Victor will convince his grandson to leave. This battle will quickly get ugly!

Victor will insist that Nick is going to regret provoking his father’s wrath. Of course, Nick will maintain that he doesn’t care about Victor’s power or wealth. He won’t think he needs his dad’s approval to be successful. Vic will also make a phone call to Hilary (Mishael Morgan) on Thursday. He’ll insist that she can air as much of the footage as she wants.

Victor will hope to humiliate Nick by letting this explosive material rock Genoa City. The Young and the Restless spoilers say Hilary certainly won’t have a problem with it. She’ll realize this will bring in plenty of interested viewers. Mariah (Camryn Grimes) will face off with Hilary over the footage as well as Devon (Bryton James). Their rivalry will continue to pick up steam.

Elsewhere, Jack (Peter Bergman) will do his best to calm Dina (Marla Adams) down. After her massive slap, Jack will apologize and she’ll eventually do the same. However, Jack will definitely be worried about his mother. He’ll discuss Dina’s behavior with Ashley (Eileen Davidson) and they’ll agree that they need to monitor the situation.

Other Y&R spoilers say Nikki will take a moment to catch up with Jack. They’ll share another kiss just as Abby (Melissa Ordway) walks in. After Abby flips out, Nikki will immediately head for the exit. It seems she’ll decide to let Jack handle this strife. Once they’re alone, Abby will give Jack a dirty look as she slams the door. She won’t be pleased by this reconnection at all.