The Young and the Restless Spoilers: Thursday, November 2 – Billy Trapped – Firefighters Hold Back Cane – Jordan and Hilary At War

BY Heather Hughes on October 31, 2017 | Comments: one comment
Related : Soap Opera, Spoiler, Television, The Young and the Restless 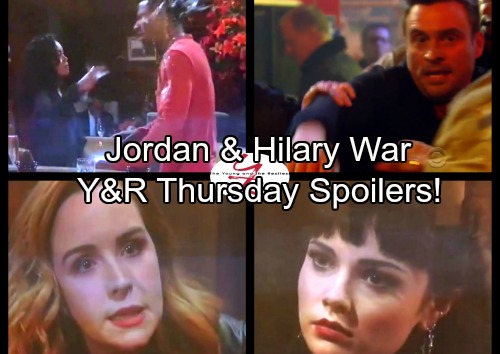 The Young and the Restless (Y&R) spoilers for Thursday, November 2, tease that Jordan (Darnell Kirkwood) will get on Hilary’s (Mishael Morgan) bad side. They’ll get into a heated argument and it won’t end well. Jordan will insist that Hilary’s nothing but a joke. He’ll contend that she’s all hairspray and nail tips.

Hilary will fume when she hears Jordan’s insults. The Young and the Restless spoilers state that she’ll pick up a water glass and throw is right in Jordan’s face. It’s safe to say this romance is once again off. Now that Jordan has crossed Hilary, she’ll be on a mission to make him pay the price. 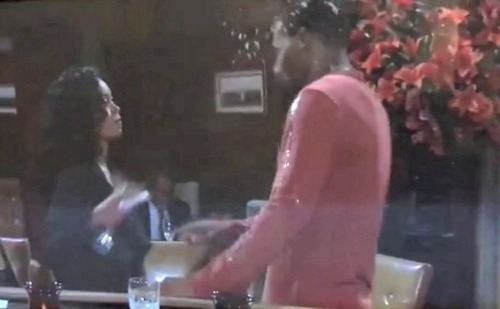 Y&R fans can expect Hilary to dig deep into Jordan’s past. She’ll hope she can score some major dirt and make Jordan sorry he dared to go up against her. It sounds like serious trouble is headed Jordan’s way. Hilary is not someone who should be messed with!

Meanwhile, Mariah (Camryn Grimes) will try to get to the bottom of some unresolved issues with Tessa (Cait Fairbanks). She can never seem to figure out what’s going on in Tessa’s head. First, Tessa acted quite interested in Mariah. When Mariah finally started to reciprocate, Tessa pulled away.

Then, Mariah chose to pull back and Tessa made an effort to stay in her orbit. On Wednesday, things shift again. Mariah hopes to set up some girl time, but Tessa tries to avoid being alone together. The Young and the Restless spoilers say Mariah will understandably wonder why they’re playing all these games. She’ll confront Tessa about what’s going on in Thursday’s episode.

As the conversation heats up, Mariah will mention how much the kiss they shared meant to her. She’ll tell Tessa to jump in and say so if it meant something to her, too. Will Tessa and Mariah resolve anything or will they keep going around in circles? Stay tuned to see where their relationship is headed next.

Finally, Cane (Daniel Goddard) will arrive at the scene of the blaze. The firefighters will have to hold this anxious father back as he yells for Mattie (Lexie Stevenson) and Charlie (Noah Alexander Gerry). Cane will hope that the twins made it out alive, but he’ll definitely fear the worst.

Billy (Jason Thompson) will get trapped as he searches for survivors, so this storyline is going to bring some serious action! We’ll give you updates as other Y&R news comes in. Stay tuned to the CBS soap and don’t forget to check CDL often for the latest Young and the Restless spoilers, updates and news.