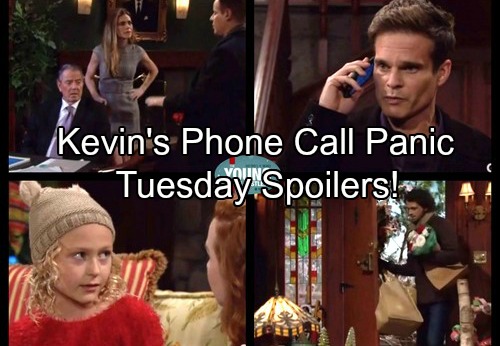 The Young and the Restless (Y&R) spoilers for Tuesday, December 12, tease that Michael (Christian LeBlanc) will pass along some bad news. He’ll arrive at Newman Enterprises with audit updates for Victor (Eric Braeden) and Victoria (Amelia Heinle). The authorities are sending an official over to meet with Victor about an anomaly. It sounds like Victor has a reason to be very worried.

Meanwhile, Kevin (Greg Rikaart) will think someone else should be concerned. He’ll have a tense tone as he speaks with somebody over the phone. Kevin will insist that it won’t be long until the truth comes out and Victor discovers what this person did. He’ll definitely fear for the culprit’s safety. 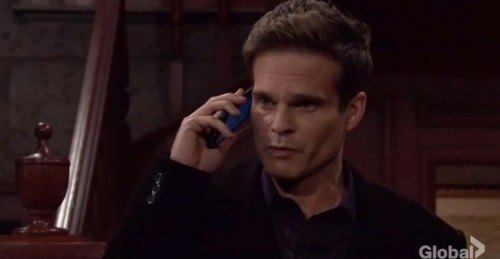 Who’s receiving Kevin’s dire warning? It’s possible that Chloe (Elizabeth Hendrickson) caused more trouble behind Victor’s back. Adam might be another option if he’s alive and carried out a plot. Chelsea (Melissa Claire Egan) is a possible contender as well. 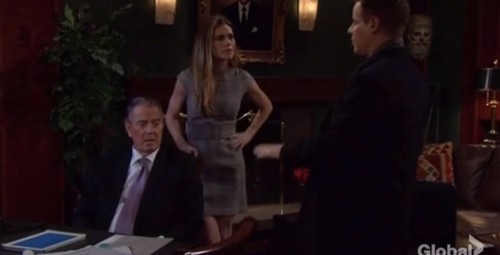 Across town, Scott (Daniel Hall) will come home with flowers for Sharon (Sharon Case). He’ll interrupt Faith (Alyvia Alyn Lind) and Mariah’s (Camryn Grimes) chat when he walks through the door. Faith will shoot Scott a dirty look before looking back at Mariah. She’ll be in the loop on a crucial secret by then. 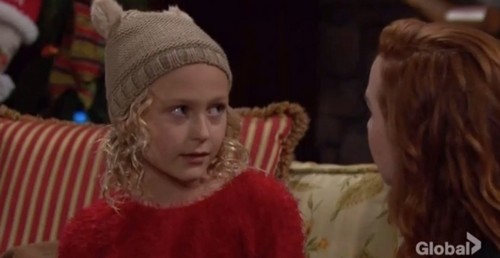 Faith will witness Scott and Abby’s (Melissa Ordway) kiss in Monday’s Y&R episode and it appears she’ll tell Mariah on Tuesday. The Young and the Restless spoilers say some uncomfortable moments are coming up. Scott may not understand why Mariah and Faith seem so cold toward him.

Mariah will definitely want to protect Sharon’s heart from further damage. She’ll let Sharon know that something may be going on later this week. Will Sharon play Scott until she gets some answers for herself? We’ll keep you posted as other Young and the Restless details emerge. Stay tuned to Y&R and don’t forget to check CDL often for the latest Young and the Restless spoilers, updates and news.