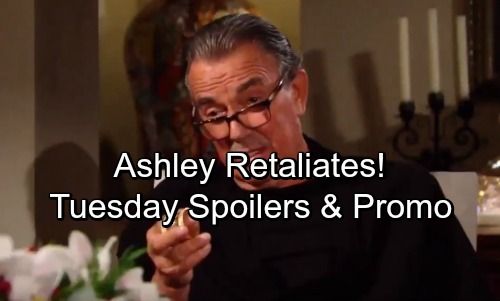 The Young and the Restless (Y&R) spoilers for Tuesday, December 26, tease that Paul (Doug Davidson) will call Victor (Eric Braeden) out on his lies. He’ll insist that there’s no way Nikki (Melody Thomas Scott) fell back in love with Victor so quickly. Paul will contend that this is all a ruse before tossing around a few threats. He’ll imply that Victor could go down when he least expects it.

Christine (Laralee Bell) won’t buy Victor and Nikki’s love act either. She’ll continue to ponder what’s really going on with these two. The Young and the Restless spoilers say Victor will sense that this charade is going to be a problem. He’ll mull it over and come up with a solution to appease the public.

Victor will want to convince everyone that their relationship is on solid ground. He’ll tell Nikki that they need to renew their vows and promote it heavily. Once Nikki agrees to say “I do” again, they’ll start planning the big event. Victor and Nikki will hope to do this as soon as possible, so they’ll work hard to pull it off.

The Young and the Restless spoilers state that Nick (Joshua Morrow) will put any lingering bitterness on hold. Since the rest of the family will be attending the ceremony, Nick will decide to sit through it as well. The Newmans won’t believe this is what Nikki truly wants, but they’ll change their tune later this week. Once Nikki and Victor begin their vows, their love will seem like the real deal! 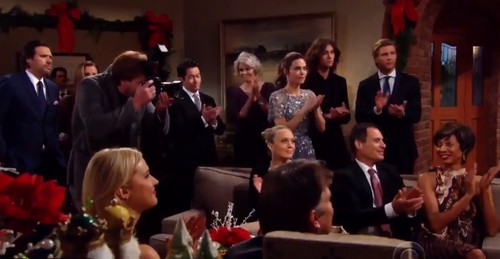 In the meantime, Ashley (Eileen Davidson) and Jack’s (Peter Bergman) war will rage on. Y&R fans know that Jack recently dropped a bomb on Ashley. He hit her where it hurts when he revealed that to run Jabot, one must be an Abbott by blood. Ashley’s paternity has always been a source of deep pain for her, so pursuing this angle is a low blow.

Nevertheless, Ash won’t give up on her goal of taking over the CEO spot. Until she can figure something out, she’ll try to get under Jack’s skin. The Young and the Restless spoilers say Ashley will deliver a low blow of her own. Maybe she’ll suggest that Dina (Marla Adams) was right when she said Jack was a disappointment to John (Jerry Douglas).

Whatever the case, Jack and Ashley definitely won’t be on good terms for a while. We’ll give you updates as other Y&R news comes in. Stay tuned to the CBS soap and don’t forget to check CDL often for the latest Young and the Restless spoilers, updates and news.