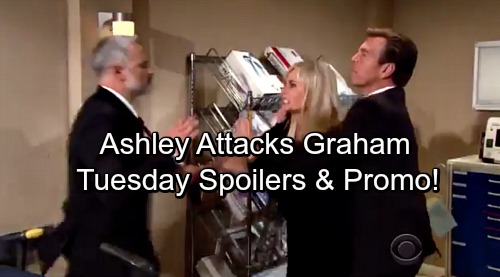 The Young and the Restless (Y&R) spoilers for Tuesday, October 17, tease that Ashley (Eileen Davidson) will make sure her mother gets to the hospital. After finding Dina (Marla Adams) unconscious in Monday’s episode, Ashley will be quite concerned. Fortunately, Dina will be OK once she receives medical attention on Tuesday. She’ll recover physically, but can the Abbott family heal as well?

It’s doubtful things will truly get better as long as Graham’s (Max Shippee) around. The Young and the Restless spoilers say Ashley and Graham will have another fierce faceoff. Perhaps she’ll suspect that Graham knew Dina was unconscious and left her there to die. The party incident will obviously come up again, too. 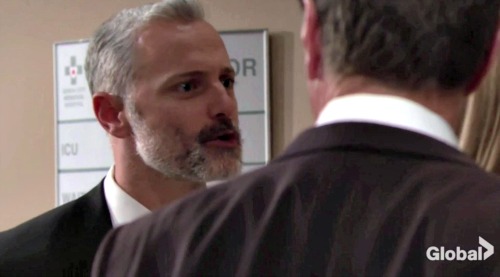 Ashley won’t be pleased that Graham turned her life upside down, but he’ll think she deserved it. As Traci (Beth Maitland) and Jack (Peter Bergman) look on, Graham will mention Brent Davis. Ashley will likely point out that John (Jerry Douglas) was her dad in every way that counted. Graham will counter that Ashley’s father was a pathetic loser just like his illegitimate daughter is today.

When Ashley hears Graham’s latest insult, something inside her will snap. Y&R spoilers state that she’ll try to attack Graham, but Jack and Traci will probably pull her away. They won’t blame Ashley for lunging at the guy, but they know violence won’t solve anything. Their family has faced severe damage. All they can do is attempt to repair it and focus on bringing Graham down. 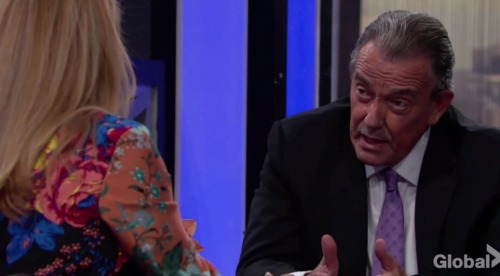 Other Young and the Restless spoilers say Nikki (Melody Thomas Scott) will remain upset about the fractured Newman clan. She’ll have a chat with Victor (Eric Braeden) in hopes of resolving the crisis. Nikki just won’t like all the conflict she’s seeing between Victor and Nick (Joshua Morrow). It’s affecting their grandchildren and that’s unacceptable.

Victor will contend that if Nikki wants to make her family whole again, she should move back to the ranch. Will Nikki be willing to go that far for reconciliation? Across town, Noah (Robert Adamson) will want to know what his dad was thinking. He’ll note that Nick’s generosity could tank their expansion project.

Nick will defend his charitable choice and promise that they can still make it work. Is Nick right about that? We’ll give you updates as other Y&R news comes in. Stay tuned to the CBS soap and don’t forget to check CDL often for the latest Young and the Restless spoilers, updates and news.