BY Marcy Cohen on December 23, 2017 | Comments: one comment
Related : Soap Opera, Spoiler, Television, The Young and the Restless 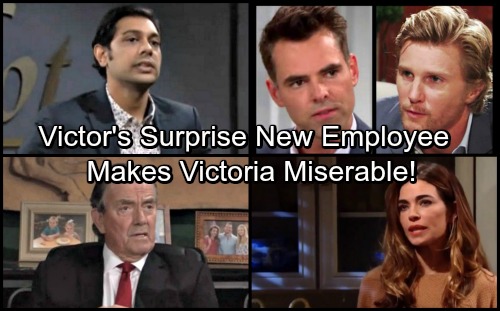 The Young and the Restless (Y&R) spoilers tease that huge changes are looming at Newman Enterprises. The sex ring scandal is finally settling down and Victor’s (Eric Braeden) account anomaly has been resolved. Paul (Doug Davidson) and Christine (Laralee Bell) will continue their takedown efforts, but they’re dreaming if they think they can truly topple Victor’s empire. It’s never going to happen!

Even when Victor faces obstacles, he always finds a way to rise above them. That’ll certainly be the case this time as Newman gets back on solid ground. However, things won’t exactly be just peachy around the office. Victoria (Amelia Heinle) and Abby (Melissa Ordway) will cause plenty of problems for each other as 2018 gets underway.

The Young and the Restless spoilers state that Victoria will boss her sister around as usual. Abby won’t appreciate how Victoria just swooped in and took charge. She’ll fight her on several major issues at Newman, so Y&R fans can expect some fierce faceoffs.

Victor will do his best to intervene when the conflict gets out of hand. Unfortunately, there may not be much he can do to ease the tension. Victor will ultimately decide to hire a new team member. He might think he needs reinforcements if he’s ever going to get anything done.

The Young and the Restless spoilers say Abby’s drama will quickly take a backseat. This new employee will get on Victoria’s bad side from the get-go. Who will Victor bring into his company? There are a few options to consider.

J.T. mentioned that he was out of a full-time job, so he could really use a position at Newman. He also scored some points with Victor by brushing Nikki’s (Melody Thomas Scott) actions under the rug. It might be interesting to see Victoria potentially falling for her ex while battling him at work. J.T surely has some talents that Victor could take advantage of.

Billy (Jason Thompson) seems a little less likely based on Victor’s disdain for him, but he’s out of a job as well. Y&R spoilers hint that Billy will tackle a new challenge soon, so we can’t rule him out. Billy would definitely irk Victoria if he came on board.

Ravi (Abhi Sinha) decided to stay at Jabot after Ashley (Eileen Davidson) dumped him, but the Abbotts have a serious work crisis looming. It’s possible Ravi will end up at Newman eventually. Victoria once tried to lure him to the family business, but maybe she’ll realize she didn’t want him around after all.

Do you think Victor’s new employee will be J.T., Billy, Ravi or someone else? We’ll give you updates as other Y&R news comes in. Stay tuned to the CBS soap and don’t forget to check CDL often for the latest Young and the Restless spoilers, updates and news.