The Young and the Restless Spoilers: Victor Let Chloe Escape Because He Knows Adam Newman Is Alive 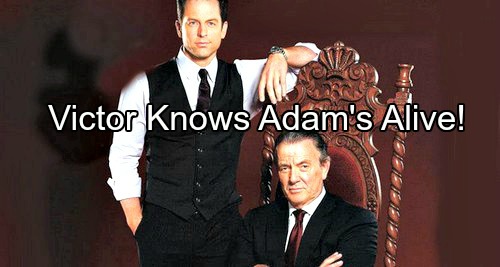 The Young and the Restless spoilers tease that Victor (Eric Braeden) let Khloe escape from his clutches because he must know that his second-born son wasn’t killed by Chloe (Elizabeth Hendrickson). In a likely setup to a fall storyline, the indestructible Adam Newman (to be played by a recast actor) will return to Genoa City. This arc actually punches back to the fall of 2013. So a memory refresher follows.

Chloe and Billy’s (then played by Billy Miller) daughter Delia (Sophie Pollono) was apparently struck by Adam’s (then played by Michael Muhney) black SUV on a lonely road on a stark October night on the outskirts of town. She died as a result of injuries suffered.

The rub was and remains as follows: While the scene was shown, no closeup of the offending vehicle was offered. Adam was driving by that plotted point at a similar time, did seemingly hit something, stopped his vehicle, got out, searched the perimeter, but found nothing. However, he later discovered portions of Delia’s clothing under his wheel wells.

Adam learned of Delia’s death, assumed he was responsible, but didn’t turn himself in. He was later exposed as her so-called killer and the daytime walls closed in.

Real life proved stranger than soap as Muhney was fired from the cast as this intense arc was playing out. Fake news insisted, without evidence, that he had wronged everyone from Wisconsin to California.

However, available facts and the remorseful actor’s subsequent comments appeared to confirm that Muhney was just too high-strung, which wore on the higher-ups and his cast mates. Recent rumors indicate that he could be recast as Adam, though the actor recently advised that nothing has happened yet.

Digitally time-shifting back to 2016, Victor purposely had Chloe released from a mental health facility so she could help him frame Adam because he’d worked with Ian Ward (Ray Wise), among other things, earlier in time.

As of this summer, Chloe was assumed dead and was attempting to escape GC with Kevin and Bella (Gia Poeme). Victor located Khloe and seemed to soften at the sight of Delia 2.0.

However, savvy Y&R fans know that The Moustache always holds a number of cards back. While the empathy he projected toward Bella was real, Victor would have turned Chloe into the police if he actually believed she’d killed Adam last September in that cabin.

Assuming that the Black Knight is aware that his son survived, he opted to release Khloe. Doing so helps to protect Adam’s cover, as his perceived murderer has taken residence in Portland, Oregon, and has no desire to ever return. CDL is a leading source for everything linked to The Young and the Restless. Check back regularly for Y&R spoilers and news!