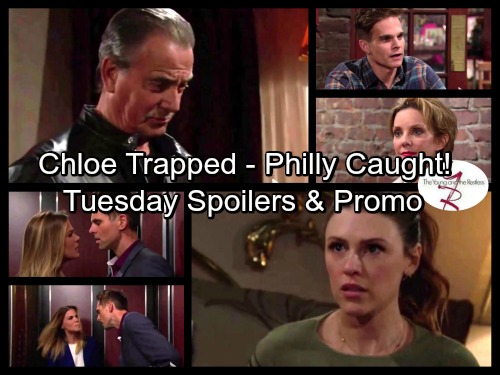 The Young and the Restless (Y&R) spoilers for Tuesday, May 2, tease that Phyllis (Gina Tognoni) will confront Billy (Jason Thompson) about his relationship with Victoria (Amelia Heinle). She’ll demand to know where he stands with his ex. Phyllis will be miffed that Billy pulled her back into his life for this. She didn’t sign up to be Billy’s sidepiece even though he used to be hers!

Tuesday’s preview video shows Phyllis shouting, “I will not be the other woman! You are not going to play me that way!” She’ll get up in Billy’s face as she sets him straight. Billy won’t be able to resist stealing a kiss during this heated encounter. Whether they’re happy or furious, sparks are always flying for these two.

However, Phyllis won’t let Billy charm his way out of this. She’ll shove Billy off and tell him to stop it. The Young and the Restless spoilers say Billy will try to calm Phyllis down so they can work this out. Later, Victoria (Amelia Heinle) will discover their reunion. Emotions should be running high during the upcoming showdown. Y&R viewers will want to check out all the drama.

Meanwhile, Kevin (Greg Rikaart) will give Gloria (Judith Chapman) some big news. He’ll provide updates on Chloe’s (Elizabeth Hendrickson) letter and the DNA confirmation. Kevin will indicate that he turned out to be Bella’s (Gia Poeme) biological father.

Gloria will nod slightly and flash a surprised smile. She certainly had problems with Chloe, but she softened a bit after the wedding fiasco. Gloria realizes that her son has been in great pain. She’ll assure Kevin that she’s thrilled to add little Bella to their family. It’s nice that he has some happiness to cling to.

Elsewhere, Victor (Eric Braeden) will give Chloe a shock. He’ll track her down and slam the door of her room. As Victor moves closer, Chloe will look horrified. Victor will unleash his wrath and it’s not going to be pretty. His family has turned against him and he holds Chloe responsible for that.

Of course, Chloe also allegedly blew Adam (Justin Hartley) to smithereens. Victor obviously feels like Chloe deserves to pay the price for her actions. What does Victor have in store for Chloe? Can she take what he dishes out? We’ll keep you posted as other Young and the Restless details emerge. Stick with Y&R and don’t forget to check CDL often for the latest Young and the Restless spoilers, updates and news.

Romance, Revenge, and the Return of Dina Mergeron next week on #YR! pic.twitter.com/ff20PAJRtk