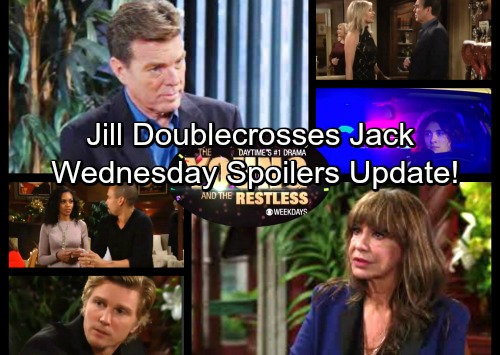 The Young and the Restless (Y&R) spoilers for Wednesday, December 27, tease that Reed (Tristan Lake Leabu) will get some shocking news. He’ll overhear J.T. (Thad Luckinbell) talking to Victoria (Amelia Heinle) about his split from Mac (Clementine Ford). Since J.T.’s planning to leave town, Reed will hug his dad goodbye and head out to a party. J.T. and Mac’s separation will hit him harder than he lets on.

Reed will try to drink away his problems, so Mattie (Lexie Stevenson) will grow concerned. She’ll urge Reed to give her the car keys, but he’ll refuse. Mattie will insist that Reed can’t drive in his drunken state. She’ll vow to call the cops, but he’ll call her bluff and speed off.

Afterward, Mattie will fill Lily (Christel Khalil) in on what happened. She’ll worry that Reed will dump her for turning him in. In his vehicle, Reed will get pulled over and arrested for a DUI. Victoria and J.T. will be stunned when they get updates on their son’s predicament. Y&R spoilers say J.T. will have to stick around and deal with Reed’s rebellious streak.

Meanwhile, Jack (Peter Bergman) will hear Jill’s (Jess Walton) latest demands. She’ll want more money for Chancellor and Cane (Daniel Goddard) will have to remain in his position. They’ll work out a deal, but Michael (Christian LeBlanc) won’t be sure about this. Jabot doesn’t have an official CEO right not, so everything’s up in the air.

Billy (Jason Thompson) and Cane will also express doubts about this agreement. They’ll warn Jill about the trouble she’s getting herself into. Lauren (Tracey E. Bregman) will back Jack up, but Jill will admit she has some concerns about moving forward.

Later, Ashley (Eileen Davidson) will give Jack an ultimatum. She’ll push Jack to choose whether he wants to run Jabot or care for Dina (Marla Adams). Jack will reluctantly back down on the Dina side of things. He’ll call an agency to help provide care, but Billy will deliver some important info. He’ll indicate that Jill won’t be making the sale to Jack after all.

Other Young and the Restless spoilers say Sam will come home from the hospital. Lily (Christel Khalil) will be irked by Hilary’s (Mishael Morgan) presence at the celebratory gathering. She’ll wonder what Hilary’s game is, but Hil will contend that some people know how to forgive.

Devon (Bryton James) will question Hilary’s motives and suggest that maybe she’s interested in Cane. Hilary will imply that it’s none of Devon’s business. Elsewhere, The Young and the Restless spoilers say Nick (Joshua Morrow) will mention a big idea. He’ll ask Chelsea (Melissa Claire Egan) what she thinks about building a dream home.

Chelsea won’t want to leave her penthouse memories behind. She undoubtedly feels Adam (Justin Hartley) in the place they once shared. Nick will understand and note that they’ll just have to add to all those memories.

Y&R fans can expect some shockers for Nick and Chelsea next week. We’ll keep you posted as other details emerge. Stay tuned to the CBS soap and don’t forget to check CDL often for the latest Young and the Restless spoilers, updates and news.